A little cold, a little ramble. We left behind the foggy glass and perennial leafiness of the Anna Scripps Whitcomb Conservatory and moved toward northeast end of Belle Isle as the sun did its damnedest to shine. 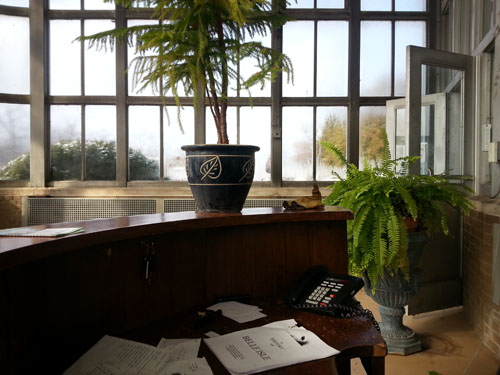 Reading, maybe, “A History of Belle Isle” at the front desk. 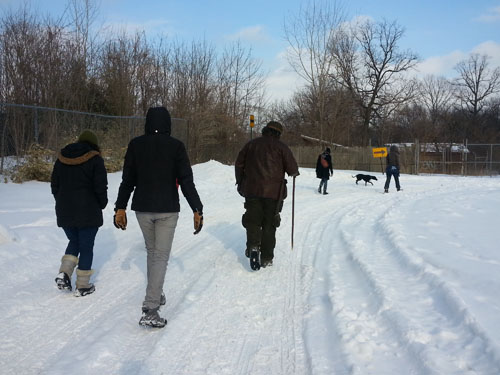 It didn’t take long before ramblers were speculating about business plans for a cafe on Belle Isle. Trudging between the frozen canals and the old zoo with its marvelous domed structures and paths swooping overhead, we entered the forest. One rambler commented on the paucity of massive trees. “They’re mostly ash,” explained another. Then we met Bert, a viny old soul outfitted with a spigot. 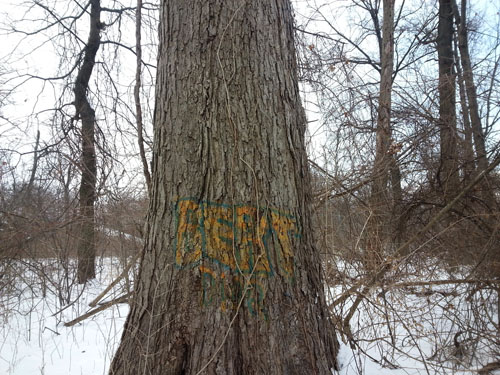 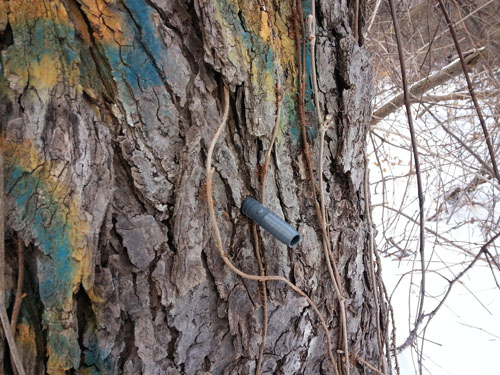 After trekking single-file through the woods, following the snowy trail divoted with ski tracks, we decided against venturing to the windy point where the William Livingstone memorial lighthouse sits, because what’s so exciting about the only marble lighthouse in the United States, anyway? We ran into some friends out driving with a camera lens enormous enough to be easily mistaken for a tripod. They advised us of nearby bald eagles, having just watched one consume a duck out on the ice.

We curved past the nature zoo, admiring its lavish bird villas, and cut behind Lake Muskoday in search of the lonely covered bridge. We sunk into snow up to our knees, not to speak of the snow still packed underfoot, wondering about the original purpose of a series of small buildings that most recently housed a disc golf center. 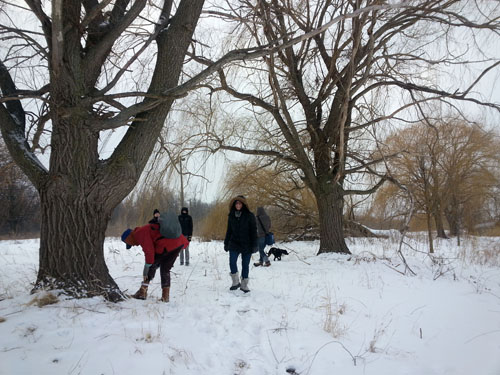 Snow in boots in snow by the willows. 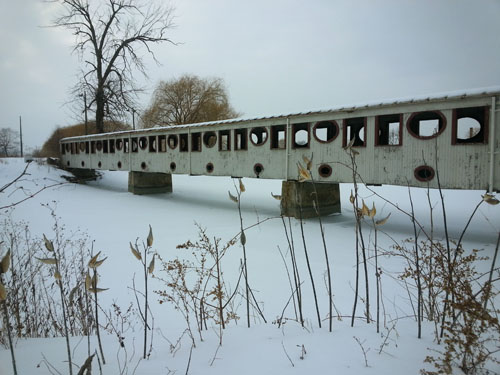 The crumbly bridge was filled with curious little graffiti and what we reckoned might be the nests of paper wasps, though they were less numerous than in the past. We sat on the benches that line either side of the bridge, trying to hug some warmth back into a cold dog, before deciding the better strategy might be to keep moving. In a clearing, huge stacks of things better called tree trunks than logs were piled high, probably evidence of Michigan’s DNR at work tidying the trails. We joked about making a nice bonfire. 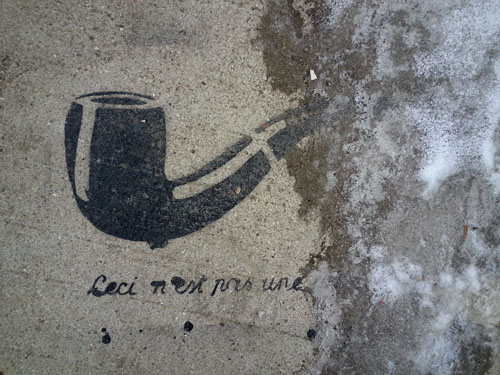 This is not a slick of ice — interesting lesson in melting things. 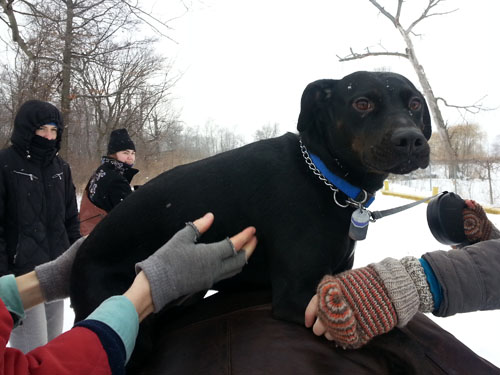 Questionable strategy to warm a cold dog — wear her as a scarf.

We never quite made it to the beach, but it was a lovely ramble nonetheless. A fleet of huge snowflakes settled all around us as we parted ways at the conservatory.

We won’t be rambling again until April, but there are lots of events on the calendar for early spring, like the annual Marche du Nain Rouge on Sunday, March 23. This year’s march will have a special contingent we encourage you to join — the Anti-Funeral Procession for Cass Corridor.

It goes without saying that it’s been cold this week. The polar vortex made a frosty, unwelcoming atmosphere that rendered any attempts to amble foolish, feeling not so much frigid as just deeply strange. Who can even remember the last time they took a walk at -11 degrees?

A likely species flourished in the elements, however. Snow creatures materialized with surprising force. Here are some of Detroit’s heartwarming efforts. 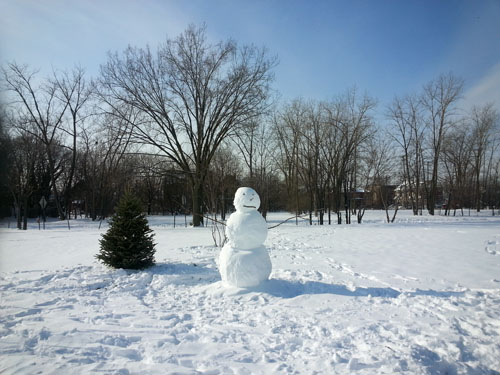 Between Monday and Thursday, over a course of 9.67 miles, there were a total of 14 snow sculptures visible in the greater Midtown area. This makes for an unexpectedly dense 1.45 snowthings per mile, even despite bitter windchills. The tally was limited to snowthings accessible from sidewalks and alleys, but it appears that most residents had the altruism — or showmanship — to locate their creations in front yards for all to see. 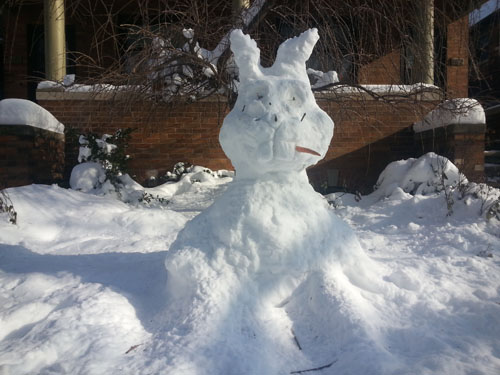 No small number of fire hydrants were masquerading as attempted snowthings, only to be revealed at a second glance as the imposters they were, sneering with the same metallic yellow grin underneath their white cap. 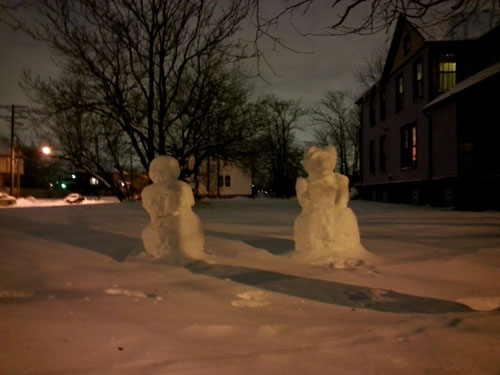 Visiting places where there are often children playing in fairer seasons, it was surprising to find absolutely no snowthings. It seems that the brave creators of these large and sometimes elaborate sculptures were ‘kids’ of a different demographic. This one, especially, lacked sufficient modesty to be well-suited for a younger audience. 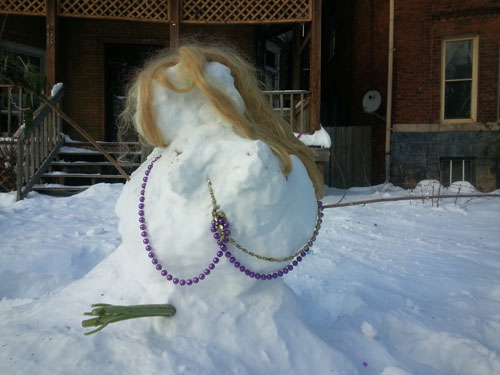 In many cases, snowthings were left unfinished, as though the hands putting them together got too cold and went inside. 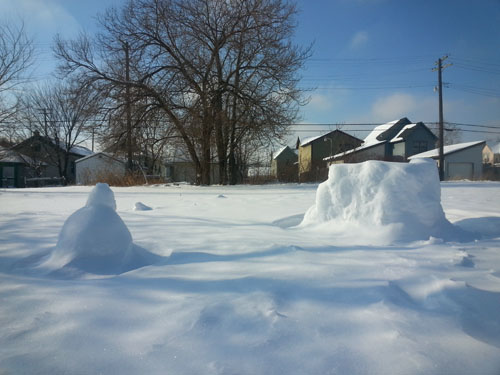 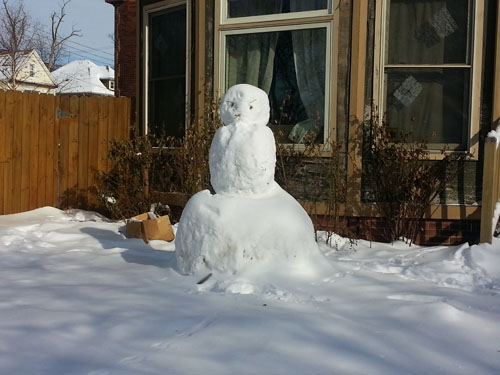 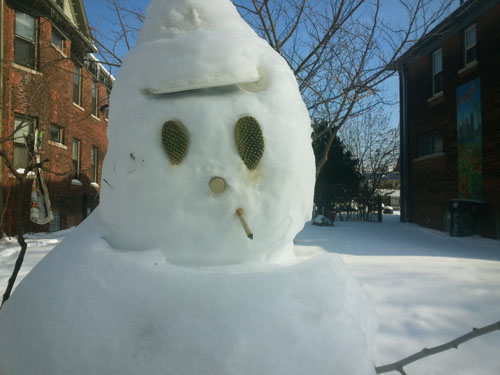 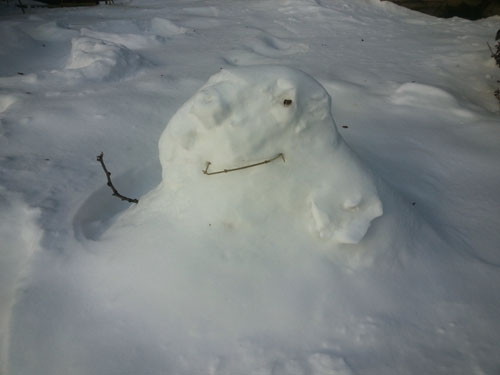 Passing by corners memorable for their charming snowmen of yesteryear, it was a delight to find their progeny alive and well, like this friendly face at Second and Willis. 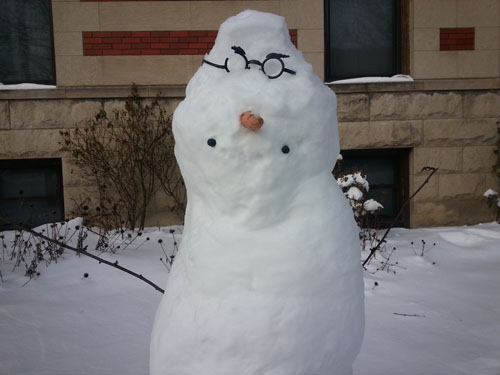 At the end of the day, the award for best snowthing did not go to a rabbit, a buxom bear, a miniature igloo, a man, a woman (or both), but to the ingenious snow carrot-holder! Or is this a porcupine under all those quills? 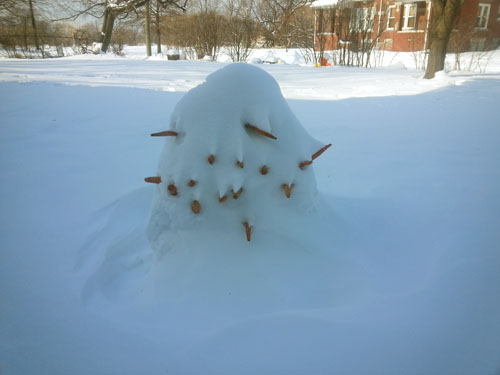 It’s fitting that the word of the day is ‘wamble,’ which sounds exactly like the kind of rambling that hapless sloppy snowmen might do this weekend as they melt their way back to where they came from. 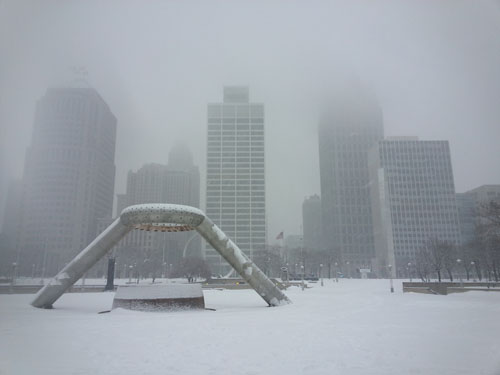 Thank you, intrepid ramblers! Snowpocalypse be damned; this weekend we walked right into the polar vortex. We met in the deserted Guardian Building lobby and traipsed through the drifts downtown, covering something like a 4.5 mile jaunt for which most ramblers were surprised to find themselves overdressed as temperatures graciously hovered near freezing. 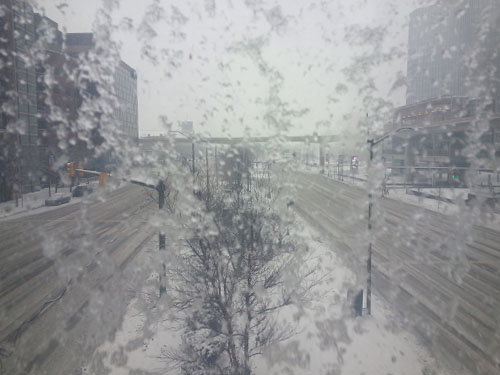 We cut through a number of buildings, exploring interior and exterior spaces connecting various destinations, following an excellent route planned with historic preservationist Timothy Boscarino and Joe Krause of Backseat Detroit tours, whose knowledge of the city may be as vast as the city itself. You can also catch up with Joe on select Saturday afternoons when he guides walking tours for D:hive. 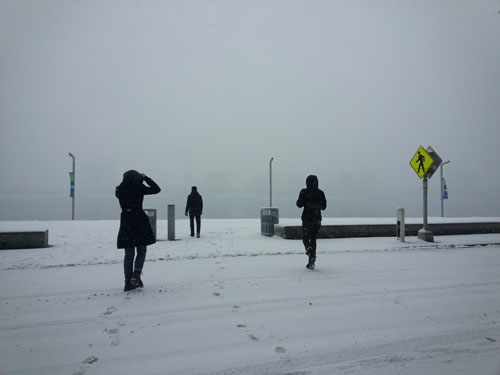 The elevated tubes at the Millender and Renaissance Centers gave us shelter and perspective as we made our way to the riverfront, an essential stop in any downtown sojourn. The only ship in our foggy field of vision was a motionless freighter, waiting out the storm. Ramblers worried about a lone family of ducks whose runty offspring were bravely surfing the icebergs. 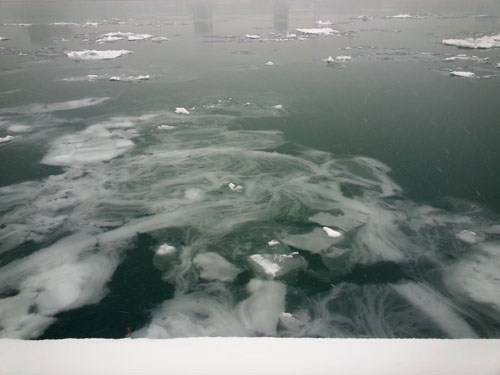 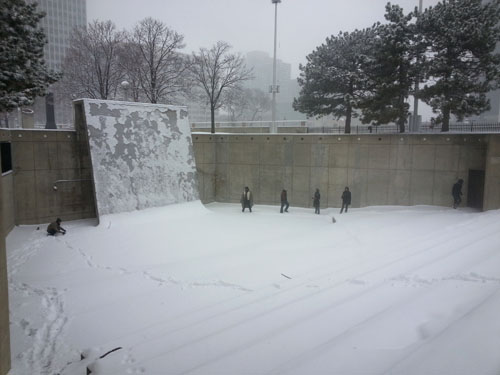 We squiggled through the deeper accumulations in Hart Plaza, untouched by buses and business as usual. Finding the snow imperfect for sculpting snowmen, a halfhearted snowball fight broke out. 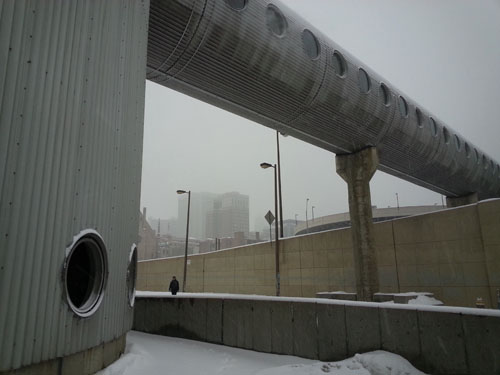 Aiming to traverse as many tunnels as possible, we were foiled by locked doors at Joe Louis Arena, which was just as well, judging by the scent making its way out of the window grates. Intentionally or otherwise, we made a fairly complete survey of every set of stairs in the area. 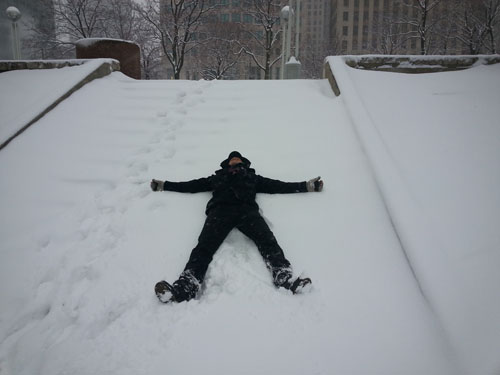 After some alleys and a visit to Capitol Park, the ramble ended at dusk, with 50% of ramblers in favor of looping back to Lafayette for consolation coneys and pie, the whole group disappointed by the dearth of establishments open and ready to serve them hot coffee during the ramble. We were undoubtedly the snowiest patrons there this slow evening. 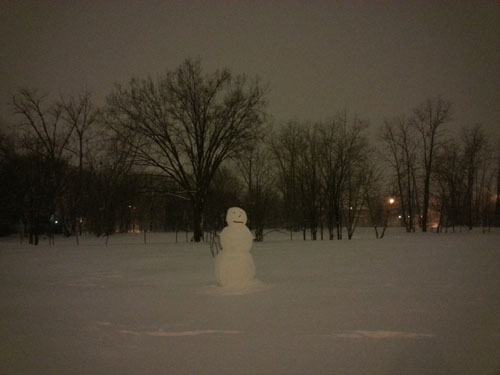 Rambling home later in the night, I happened upon success where earlier we had failed — a snowman stood in the middle of a field, wearing an uncertain expression as the wind gusted mightily.

from ‘The Snowy Day’ by Ezra Jack Keats

Saturday’s commute isn’t quite as fantastic as Ezra Jack Keats’ famous treatise on the merits of snow days, but it’s close.

Snow is hitting me in the face. People come bundled in pairs, shuffling along. It’s hard not to think of duos boarding the biblical ark before the flood. In questionable logic, pedestrians take to the streets as cars grapple for traction. 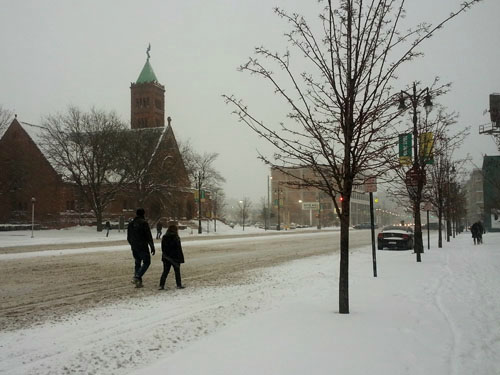 A pair of pedestrians walking down Woodward.

A pair of medics are out in front of an apartment building, waiting agitatedly. As I hike closer to them, one yells, “Hey, are you the patient?”
“The patient? No,” I holler back, laughing. How, in this moment, hale and red-cheeked, might I look as though I require medical assistance? Maybe these perambulations are an outsider’s preoccupation.
They shrug, frustrated, and climb back in the ambulance. When I catch up with them a minute later, they roll down the window. “How far are you going? Do you need a ride?”
“No, I’m fine,” I say, all instinct, “Just to the library,” abbreviate my course for their benefit. The streets aren’t empty; the buzz is that the library is closing early. Hastening is absurd. There’s still time. The snow slows everybody’s footsteps, covers their tracks. 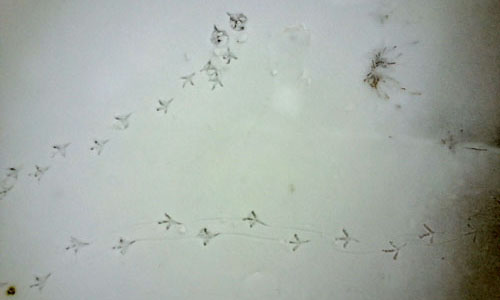 Darkness takes longer than usual to show up this evening. When it does, the snows reflects light, giving the sky has that comforting wintery pallor. It brings about memories of being small and warm, someone making hot chocolate with marshmallows, the lofty roof of a blanket fort overhead. Brushing off my coat and hat, I take the long route home, searching for snowmen other than myself. There aren’t any yet. No snow angels either, but residents are out with shovels and brooms in a seemingly futile effort to keep the still-falling snow. Someone walks with a dog up past its elbows in fluff. 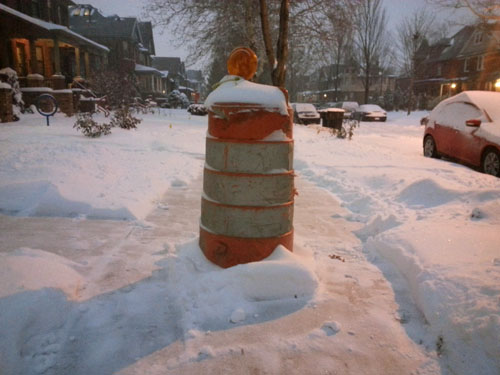 All in all, it was hardly a snowpocalypse. The National Weather Service claims just six inches of snow in Detroit, but as the blustery flakes fell into windswept dune-like formations, it seemed like more. Of course, winter is yet to come.