Plans to extend the Dequindre Cut from its present terminus at Gratiot north to Mack have been in progress for a year. The trail was expected to be open at the end of November, but completion will be delayed until late next spring. Rails-to-trails paths are a popular option among planners — across the country, old railways are being repurposed as green jogging, bicycling, and walking havens.

We will ramble the Dequindre Cut, observing what is lost and what is gained as humans force various phases of development on the land. What was there before the railroad? What will be there after? What is the future of greenspace in cities?

Walking is free and open to the public. We will meet at 4:00 at the current northernmost point of the Cut. Ramblers are encouraged to bring beverages, snacks, sweaters, senses, questions, and answers. Ramblers should take care to outfit themselves with good shoes or else. In case of severe rain, we’ll ramble the following Sunday.

Also, London is apparently the world’s largest urban forest. Should the entire city become a national park? The Independent reports.

Other fun happenings:
Tweed Ride Detroit, an “annual celebration of fall, tweed, bicycling, & Detroit!” will also take place Sunday, October 19, starting at 1:00 at the corner of Warren and Trumbull. This whimsical event will be marking its fifth anniversary. Ramblers, you have lots of leg muscles — why not make them all sore?

A cardinal rule of walking in cities that everyone learns when they’re knee-high and first able to comprehend quantifiers such as ‘both’ is, “Look both ways.” In Detroit, it’s long been the case that one-way designations have been perceived only as an emphatic and occasionally policeable suggestion. Looking both ways is automatic, but with recent road construction in Midtown, it’s a great time, as rambler Michaela would put it, for a reminder from your local mom: Look both ways before crossing the street! 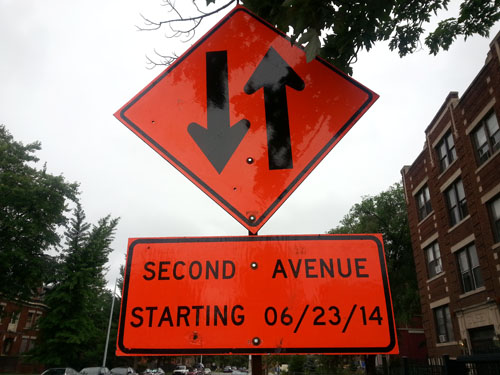 This particular street is Second Avenue. Last week, road crews were out making good on an old plan to restore Second to something like its historic proportions, and as Curbed contends, “ending its reign as the neighborhood’s most illogical thoroughfare,” at least since Third underwent its conversion last year, I guess.

The gesture, with planning provided by Midtown Detroit, Inc., was well-received, with media making a big deal about the “cushy” buffered bike lanes, but it seems that certain populations have been left out of the plan. You can mumbo-jumbo your way through all the ‘complete streets’ buzzwords you want, but without facilities for all road and sidewalk users these streets are incomplete. 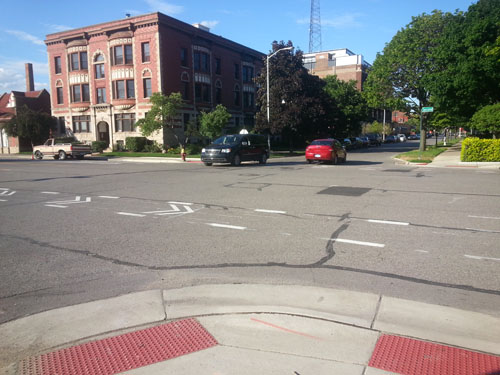 After a week of bidirectionality and new bike lanes, things weren’t looking any better for pedestrians. No crosswalks have been installed; not a single line demarcating a street crossing has been laid. Pedestrians can cross safely at Selden and at Forest, but in the intervening “walkable” blocks no provision has been offered. Thinking that the oversight must be temporary, I waited, then asked questions. As of Tuesday, everyone who knows anything about sidewalks in the Department of Public Works or at Midtown Detroit, Inc., was on vacation. 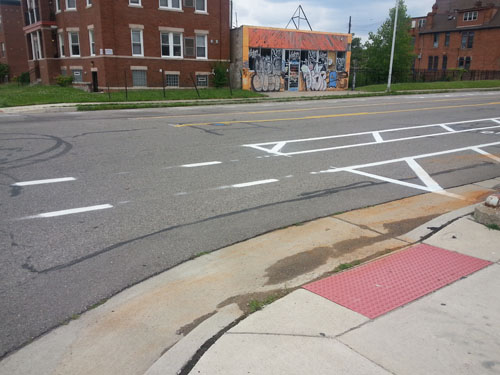 At least there’s no parking in the crosswalk.

Deviating slightly from my usual commute, I walked north on Second and asked other pedestrians as we crossed paths how they were doing and what they thought of the new paint job. (Not including people wearing earbuds, which may have skewed results). They were all fine, thanks, but the exchange got uglier as the subject turned impersonal. I’m not a fan of the change, but I was anticipating that at least someone would like it. No one did. “Let me tell you, I hate it, man. It’s a thoroughfare. It used to be a neighborhood, and now it’s a thoroughfare. And it sucks,” ranted one woman impassionedly. “I don’t like it,” said the next man who passed. “I liked it better when it was one way. Now there’s a lot more traffic. I’m used to looking both ways, but… I’m still getting used to it.” He looked down Second and concluded, “I like the bike lanes, though!” 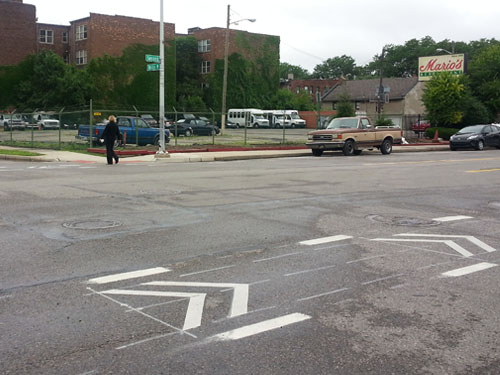 This pedestrian made it across safely, but will you?

This is hardly about which format is better — it’s about disregard for pedestrians, no matter what the roadway itself holds. Nobody really knows whether the purported benefits of two-way streets actually pan out. Two-wayification is a traffic calming strategy intended to reducing vehicle speed, miles travelled, and pollution emitted, while hopefully increasing pedestrian safety and walkability. Studies have shown evidence for both outcomes — safer for pedestrians, not safer for pedestrians, and so forth — so like many cities following the trend, Detroit is another willing to pay a good deal of money to do an experiment on which it isn’t even collecting data.

In my experience, none of the planner’s promises have materialized following the Third Street conversion. Crossing has been at best a nuisance. Avoiding speeding cars coming from both sides, poorly timed so as to require waiting longer to find a suitable gap, has been an issue both as a pedestrian and a cyclist. Even if the change had caused traffic speeds to drop, slower traffic often equates to more fumes and road noise — not the types of amenities Midtown aims to offer its residents and guests. After recently establishing that the dominant scent of the Midtown Loop is exhaust, creating more smelly “walkable” areas is an odd priority. Leaving Second alone and putting bike lanes on Cass, the adjacent more heavily-travelled existing two-way, could have been a consideration, though it’s a tight fit as it is.

This transition could be done well, making life better for both pedestrians and cyclists — it just hasn’t been yet. Perhaps it wasn’t a slip of the tongue when the Free Press quoted DPW director Ron Brundidge saying, “Whenever we have an opportunity to promote more non-motorized transportation use, whether it’s bicycle paths or making it more pedestrian friendly, we definitely want to employ that as part of the principles of design” (emphasis mine). This isn’t an either-or proposition. It’s a rare opportunity where everybody can easily be safer and happier. 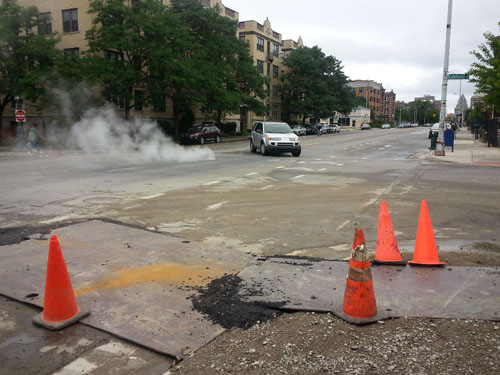 Like city employees and Midtown Inc. planners, I’m going on vacation. Perhaps when I return from walking around where there is no concrete to bicker over lining with crosswalks (North Country Trail!), the city will yield great surprises. Could it be a fleet of yield signs for crosswalks, like at Hancock and Cass (where I always resist the zealous impulse to walk though the intersection just for fun)? Maybe DTE’s gas line dig sites at Canfield will lay foundations for a pedestrian bridge or lead to a subterranean crossing, like the vestiges of one further north on Second. Just kidding; a concrete hole in the ground probably doesn’t count as a greenway.

The Detroit Area Rambling Network is all about making the most of pedestrian opportunities in the city — we already live in some permutation of a walkable city, so let’s use it. Some lines on the ground probably aren’t going to save my life, but crosswalks at least promote awareness that hey, people actually walk around here. It’s a sad day when an area like Midtown becomes less safely walkable, even if within the context of greater progress.

What makes one thing more beautiful than another? Sometimes beauty can be measured, like the symmetrical arrangement of facial features; other times, it remains wholly elusive. What makes this landscape lovelier than that? What makes one street more appealing than the next? It’s a simple matter to characterize a neighborhood’s well-being by population flow, crime statistics, health trends. As Frank Hebbert of OpenPlans says, “But it’s harder to establish the softer feeling: Is this a place I like? Would I prefer the street on the left to the street on the right? That’s not a metric, but a gut feeling about comparing places.”

This last quandary is what the people at OpenPlans have set out to quantify and solve. For Valentine’s Day, they launched the Beautiful Streets project, which asks visitors to choose the more appealing scene out of the two options presented on the page. The site is populated by images of Philadelphia from Google Street View. 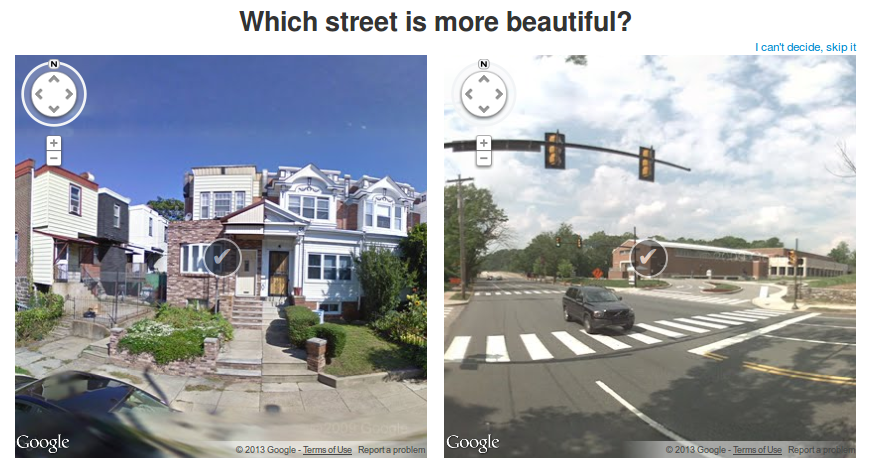 Not everything in Philadelphia is beautiful, and this is what works so well about this project — its unabashed realism, albeit through a fisheye lens. Fortunately, there is a ‘skip’ button for each pair. While sometimes one image seems almost objectively fairer than the other, it is more often than not hard to tell which streetscape would better lend itself to a good stroll. Ask yourself: what are my priorities? Trees, shrubs, sidewalks, density and attractiveness of buildings? What about the instances when these fine things are in competition? It’s challenging, too, to base a judgement solely on the content of the image, without yielding to the enticements of good composition or blue skies, the distortion of lenses and the fleeting smudges of cars. It’s tricky enough deciphering where the sidewalk leads in the umbrage of trees, and whether it would be nice to walk in their shade, or peering past the bridge to see whether the shops are worth visiting without having to assign a superlative to either potentiality. 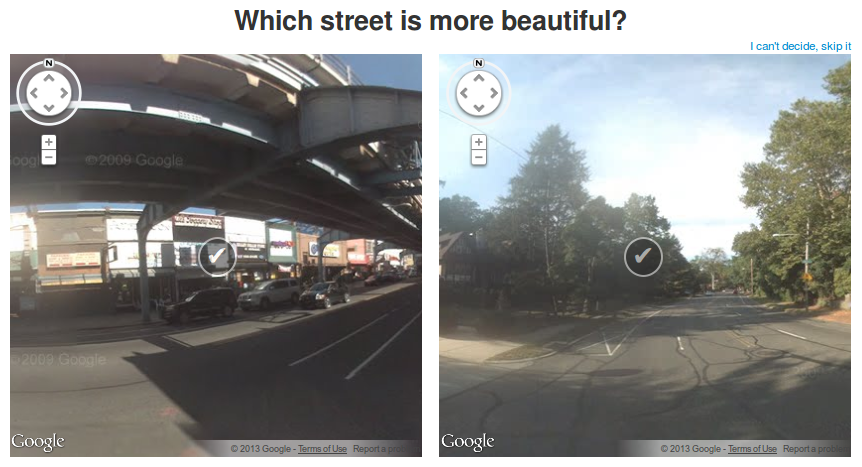 Whether Beautiful Streets will become the data goldmine the planners intend is a dubious unknown, but meanwhile it’s fun to flip through the images, taking a gander at the views of human nature on display. Read more about Beautiful Streets at the Atlantic, or help make the Beautiful Streets project more meaningful with your input!