When not covering new territory in the city or on a trail each day, what purpose does a daily walk serve? There are the obvious answers — commuting, physical health, stress relief, dementia prevention, community watchfulness, meeting the neighbors, practicing for when you get a dog. At the end of this line of thought one is left tracing the same tenuous path as the previous day, or coming up with variations in a familiar pattern.

When I was younger, I’d take a similar walk every day after school, in the evening. The moon would often be coming up. Flowers would appear and disappear on plants, leaves on trees would spring forth and die back. The air would become humid, then crisp. The light did all sorts of crazy things depending on the season, the weather, the day.

These sorts of walks invariably make me think of Monet. When he moved to Giverny in 1883, a ways outside Paris, he sat out in all seasons enjoying the garden. He acquired land across the road from his house a decade later and expanded the gardens, digging a pond and building the water garden with its famous Japanese-inspired bridge.

For all the emphasis on novelty and adventure, there is some great virtue in doing the same thing again. Viewers find Monet’s Nymphéas relaxing, serene blurs of plants melding into sky into mist, shadow, reflection. Like many pursuits of beauty or happiness, this one was tempered by an ambition that may have uprooted what looks like self-evident tranquility. (Actually, to me, a number of them look rather maniacal. That’s nature for you). 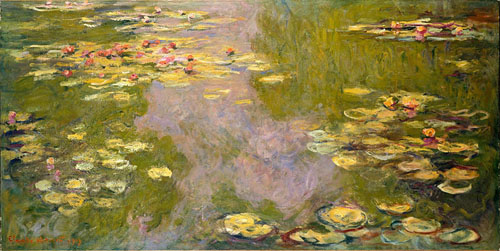 Monet’s Nymphéas in 1919, via wikipedia.

“These landscapes of water and reflections have become an obsession,” Monet wrote in 1908. “It’s a continual torture to me!” Squinting at his lilies, rummaging through half-finished paintings to find the one precisely matching the conditions of the day, obsessively devoting canvas after canvas to the same damn thing — was Monet really happy? He put more and more of his energies into the garden — enlarging the pond, exchanging rare plant varieties with his friends, commissioning the bridge. He hired a gardener to boat around the pond in the morning, cleaning soot from passing trains off of the lily petals. He financed paving the road to eliminate dust that would leave an unsightly patina on his plants. He trimmed the lilypads themselves. “All my money goes into my garden,” he complained. Yet, “I am in raptures,” he is quoted as saying on the official website for the estate. 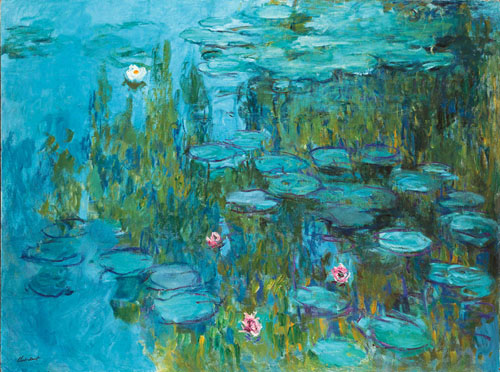 In the moment of doing, it’s hard to tell which work is important to be done. I have jobs, guys, and poor time-management skills, and none of those jobs could be described as neo-Impressionist painter. What does Monet have to do with walking, if all he did was sit there in the garden? Many other artists and writers have had equally solid, and highly perambulatory, preoccupations with the outdoors. But I think of Monet at these times because of his exquisite attention to the passing day, his willingness to sit and document the scene before him, and more importantly, record the less palpable things it evokes. For Monet, as one art historian said, “Memory, rethinking, double-backing and moving through space all become part of the act of seeing.”

For Monet, his obsession with the garden and the painting of it paid off, at least by external measures if not in his own joy. Of this, how much reality, how much shimmering myth?, I wonder as I walk around town, waiting for gardens to enliven. To actually see the water lilies, of course, you’d be better off making the 88 hour walk to Chicago, where you can squint at haystacks and poppy fields and a few of the famous floating plants as the master himself did. 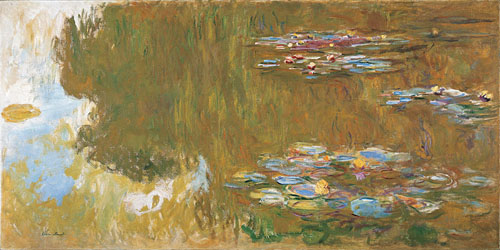 Channelling Monet, I embark on my little segments of the thousand miles I’m determined to walk this year. As writer Craig Mod discovered when he experimented with tracking technology, finding himself scuttling through the night to bound up and down staircases in pursuit of his goals, we do funny things when someone’s watching, even if the someone is none other than ourselves.

It would have been great to do this experiment like science — spend a year recording without any particular resolution, establishing a control to see what a normal number of miles is for me in this city — not an average abstract number, but something personally relevant.

Walking with a generous friend into the frigid twilight earlier this month, watching the sky go blue as the snot in our noses stung and froze, he asked me about the nature of these walks. “We could be sitting inside,” he pointed out. Why were we walking? Was it for exercise? They make gyms for a reason, went the thought unsaid.
“I didn’t really think so much about it being a physical thing,” I told him. “I don’t think anything will happen to my body if I walk three miles a day. I picked the number because it seemed reasonable.” Walking a few miles a day hardly seems like a marker of any level of fitness, when the rest of the non-sedentary world wakes early in the morning to run 5 or 10 miles.
“Yeah, what’s that, 45 minutes?”
“About an hour. You see things, get distracted, take pictures, run into neighbors, friends… And that’s the point. It’s lovely. So it ends up taking a lot longer, when you factor all that in.”

Still, on grey days that alternate between drizzle and hail that bends the eyelids in half, I wonder if I’m just, so to speak, gilding the lily.