The most recent ramble began at Public Pool in Hamtramck, January’s weekend destination of picnic fun curated by Picnic Club Detroit in conjunction with their exhibition “Picnics in the Polar Vortex”. A mix of ramblers, picnic-clubbers, and random gallery-goers down for whatever chatted, looked at the art, and bravely set out into the 35-degree sunshine.

We strode east on Caniff amid conversations of the neighborhood’s history (allegedly having been called Ducktown when it was populated in the 1920s — nobody knew why). Scenes of tranquil domesticity abounded — the house with its shoe rack kept on the porch; another with a lush, moss-like carpet over the walkway; a sidewalk painted with wild patterns in celebration of the residents’ wedding day.

At Mt. Elliott, these gave way to a more barren industrial feel that would characterize the heart of this ramble. We boarded the long hidden pedestrian ramp that would take us to the bridge spanning the rail yards, encountering a woolly but passive beast along the way.

After the noise and grime and scenic views afforded by the bridge, we made the best of the dull stretch of Mt. Elliott before travelling east again into our destination, the I-94 Industrial Renaissance Zone (more info). The character of the ramble shifted to that of a nature walk as we followed a little path cutting between hills full of brush and burrs.

Yet all around this outpost of wilderness, the land had been bulldozed clean to make room for decades of promised industrial park, now alleged once again to come to fruition, or at least pavement. The large pink diamond that Picnic Clubbers had found so photogenic was covered in snow. We explored the zone independently for a while, investigating its quirks and borders, lighting smoke bombs in tribute to past picnics, and drinking tea. Our time in the zone felt short despite the wind and overcast sun.

Searching for the pink diamond.

Leaving the zone, we checked out some small abandoned churches and stopped to right a toppled street sign in front of one. Crossing Mt. Elliott, a mile south of where we’d initially veered onto it at Caniff, the neighborhood again changed drastically. Miller and the surrounding blocks felt much like Hamtramck, with its dense population of neighbors going about their business and some variety of hustle and bustle happening by a school prominently situated at what feels like a town square. We popped into an unpretentious bakery tucked into the corner of a strip mall for some cheap tasty snacks.

Checking out the remote location of What’s Fowling and admiring a deluge of ice under the train bridge, we hiked north on Conant, tacking randomly across Belmont to return to Gallagher, and to more warm beverages and cookies, art and books, waiting at Public Pool.

Thanks to everyone who came on this special ramble! Much thanks too to the picnic clubbers who sat the gallery and made sure there was enough picnic magic to go around. Please join Picnic Club Detroit on their next adventure — you can keep in touch via their blog, mailing list, or, God forbid you join the twenty-first century without me, Facebook page.

Speaking of the twenty-first century, although Facebook owns everything, Detroit Area Rambling Network is now on Instagram @detroitrambling. Bonus #darnrambles photo documentation and Detroit #walksnaps every day! It’s beautiful. Check it out.

In collaboration with Picnic Club Detroit’s Picnics in the Polar Vortex show underway at Public Pool in Hamtramck, we will be taking a hike at 2:00 this Saturday, January 31. (Please note the day! This ramble will take place during gallery hours on Saturday, not on Sunday as most rambles do). Our destination is the I-94 Industrial Renaissance Zone, where Picnic Club held its very first picnic in April of last year. We’ll be returning to see what’s changed on this urban prairie as the seasons have passed. Where we once rustled through brush participating in the “Birdwatching Within the Barricades” picnic, we’ll find a scene rendered unrecognizable by more than a mere layer of snow.

The zone has recently received considerable attention from people other than birdwatchers and urban explorers. As the city aims to develop the area into the industrial park it was intended to be in the first place, cleanup efforts seem to have overtaken some of its charms. Lear and Penske, Crain’s reported last month, are eyeing the spot with its attractive financial incentives in mind.

Out of ten picnics in ten months, two picnic locations have been lost to development. Since only three picnic spots have been places with no official designation or concordant protections, like other places we’ve visted — Rouge Park, the Belle Isle aquarium, the course of the Peoplemover, two Picnic Club members’ residences — the extinction rate of these places is much higher than the numbers seem to say. The other development casualty is the amply forested site we enjoyed during “A Human Geology” picnic. The trees and grasses and ecosystems that intervened after the former Piquette plant burned in 2005 have been bulldozed.

Cataloging and chronicling these changes is an essential reflection that establishes history and informs our future use of land and other resources. We document these spaces in our photos, artifacts, memories, so that when they vanish they leave some trace. Moving between, through, and around these spaces, we document them in the tactile muscle memory of our bodies. This is the importance of our picnicking and rambling, examining and experiencing these places before they shift into their next stage of being.

The forecast is chilly, so please come prepared for weather! Your thermos should be full of some kind of hot beverage, and your hands should be full of mittens, or whatever keeps the frostbite at bay. Expect a 5-6 mile ramble — we’ll be returning to the gallery before it closes at 6:00. As always, walking is free and open to the public. Hope to see you this weekend. 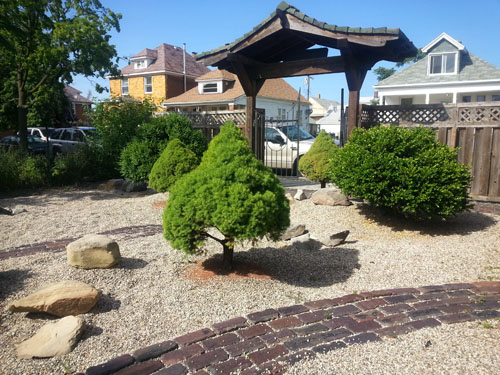 We started the ramble on the narrow brick paths of the Zen Center garden, winding toward the gate. In accordance with the beautiful day promised by meteorologists, iced beverages were first on the agenda, so we stopped into Delite on Caniff before turning north again. We peered into Popp’s Packing, revisiting the origin of one rambler’s dissipating hangover. Looking at fields striped with rows of red clover, one rambler shared with us the secret to extracting nectar from the blossoms. 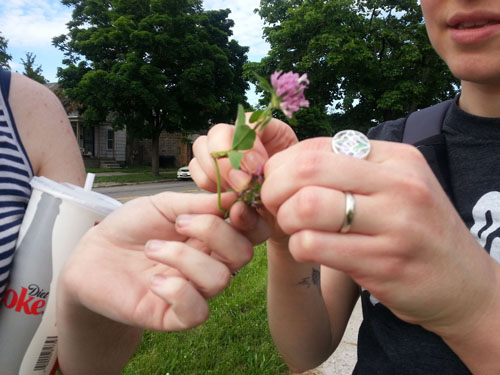 We crossed the freeway at Carpenter, Hamtramck’s northern border, where the Colonel Hamtramck Homes are situated west of Dequindre. The first federally-funded public housing in Michigan outside of Detroit, the tight community of old buildings has an otherworldly feel. It’s also the only place where I’ve noticed street signs posted directly on buildings. 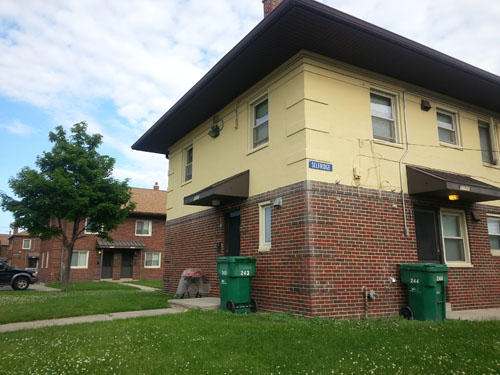 We passed by the long blocks of the scantily-forested Grand Haven-Dyer revitalization project, a strip of Hamtramck that feels decidedly Detroit, with the vacant lots dotted with uncomfortably new brick and vinyl infill homes. We crossed the freeway again.

We marvelled at the phenomenon of multiple homes housed on single lots and smaller residences set back from their larger neighbors, lending an uncanny sense of suburban privacy. North of Caniff the streets are lined with the monotonous two-story flats I associate with the city, but venture south and everything changes. 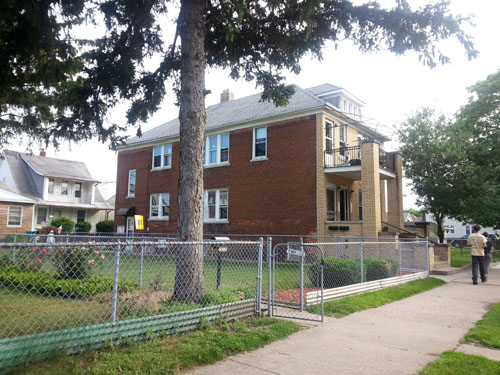 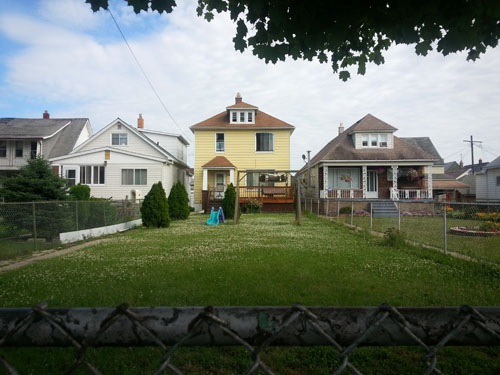 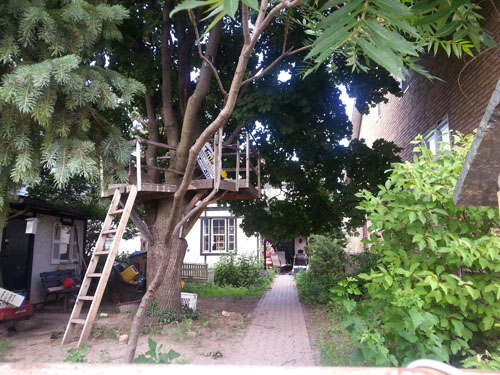 Here we found the old Hamtramck, as resident historian Greg Kowalski put it, of “tidy homes on tiny lots.” Ramblers were very relieved to not be “in the middle of nowhere” touring block after block of tedious “nothingness” like last time — not sure how well this bodes for future walks in Detroit. Hamtramck offered plenty to keep us distracted — quirky signage, milk crates sprouting from trees in makeshift basketball hoops, flowerpots filled with onions, a lonely sand-colored military vehicle, ice cream trucks, and huts carved out of garages to cozily house garbage cans, reminding me of shelters at the end of long driveways in rural areas for kids awaiting the school bus. 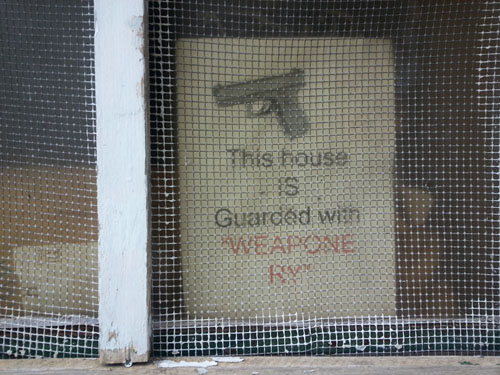 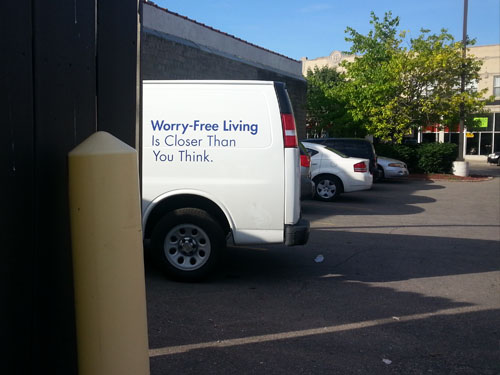 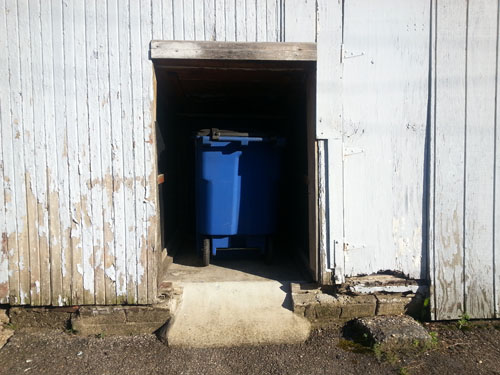 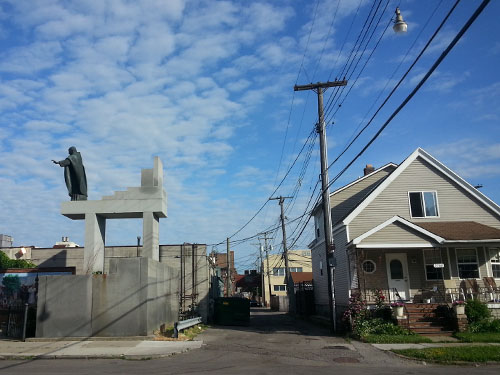 After emerging from the alley paralleling Joseph Campau, we walked along Florian, selected for its high probability of being the most tree-lined street in the city. Mass was in session at the enormous church, and we lurked in the garden for a moment listening to trills of organ spill from the cathedral’s open windows.

Making our way to the southwest corner of Hamtramck, we stopped to rest next to Hamtown Farms, not exactly an oasis with its picnic tables and benches out in full sun. Further down Lumpkin, stopping to use a conveniently located portapotty at the site of some new construction, we watched a field of soccer players in the foreground of an odd clear view of the Fisher building. Now that the American Axle plant no longer fully spans between Denton and Holbrook, the sight was a reminder of how close seemingly isolated landmarks are in the city, despite perceived long distances. 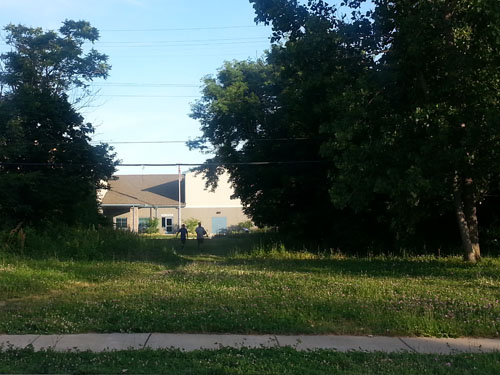 Where there had been gritty, dusty lots in the past, scars of recent change, nature had reclaimed the south end of town and was coexisting nicely with residents. Instead of seeming blighted, the accumulated verdure was well-kept and reassuring. The neighborhood had a certain healthy lushness I didn’t remember before. An exception was Holbrook Garden, a tribute to master gardener and activist Gerald Hairston, where the lovely pergola was overrun with brush and the wayward memorial sign had sprouted many tags, ironically enough many of them pledging, “I love”. 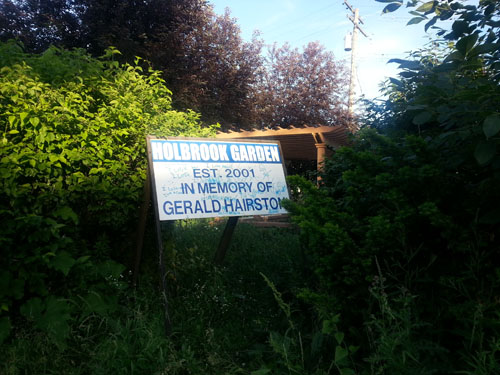 We passed the funny red Holbrook School, whose tiny playground I used to cut through, admiring its economy. I was surprised to find out later that the school, built in 1896, is perhaps the oldest continuously operating school in Michigan. Fortunately voters passed a millage to protect the buildings a few months ago. We saw most of Hamtramck’s schools between these two walks, at one rambler’s request passing by the lovely historic Hamtramck High School.

Ramblers rambled in for a sugar fix at Detroit Donut, then went east to Gallagher and north toward the Zen Center garden. As the light began to fade, popular vote took us in the direction of Aladdin, overshooting our starting point. On the fragmented walk back to the Zen Center garden later, the twilight air was redolent with night-blooming jasmine. I hope other ramblers got to smell the flowers, too.

Thanks for rambling! We hope to see you all next time. Sign up for our email list to get the latest rambling reminders.