Cities can be stressful places. Crowds, traffic, crime, grime, offices, jobs, chairs, factories, chemicals, freeways, too many odiferous White Castle locations — it wears on a body. The industry formed around reducing stress to manageable levels is vast and worth some stressful number of dollars. Fortunately, many of the ways to counteract the stresses of living and living in cities are cheap and abundant. Breathing deeply, walking around, and finding some nature are obvious antidotes.

Finding nature, even in a city known for its wilderness — its pheasants and hawks, coyotes and foxes, fields of tall grass and sprawling mulberry trees — can be tricky. Officially, there’s Belle Isle, of course, and Rouge Park, and, if you’re really desperate, the meager route of the concrete-encased Dequindre Cut Greenway. But the pursuit of the real forest experience, free from the sounds and scents of civilization, encourages some Detroiters to trek outside the city. 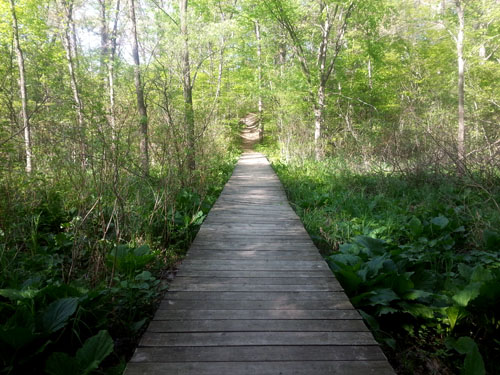 What is it about nature that is so deeply relaxing to human physiology? Studies have demonstrated that simply looking at pictures of woodsy scenes calms the brain. Scientists have also been reviving and formally investigating the effects of supposedly traditional practices like forest bathing. Forest bathing! Just the phrase sounds like a balm for our frenetic selves. The Finnish Forest Research Institute is conducting a multi-year study on forests and human wellbeing, and South Korea is investing $140 million in a new National Forest Therapy Center. Japan is the leader in forest medicine, with 48 forest therapy trails as of 2012, and 52 more planned in the coming years. This is a big step beyond, for example, the healing gardens boasted by American hospitals that want to bill themselves as more progressive, holistic, green, and genuinely caring.

The Japanese government coined the term for forest bathing in 1982 — shinrin-yoku, defined as “making contact with and taking in the atmosphere of the forest.” Inspired by ancient Buddhist and Shinto practices, it was a nondestructive way to use Japan’s forests, which cover two-thirds of the country, and to soothe a perpetually wired, frenetic society that has the third-highest suicide rate in the developed world. The government funnelled about $4 million into forest-bathing research between 2004 and 2012. Studies had already shown that hanging out in the woods benefits anxiety, depression, creativity, and cognition, but nobody really knew what was happening to the body on a molecular level.

Two scientists have shaped careers around coming up with an answer to this puzzle. Yoshifumi Miyazaki, a physiological anthropologist at Chiba University, might be forest medicine’s biggest proponent. He’s studied the myriad effects of nature on the body, comparing nature walks versus city walks according to various measures of stress — biological markers like cortisol levels, sympathetic nervous system activity, blood pressure, heart rate — and subjective ratings of moods, anxiety, and depression. Florence Williams, author of Breasts: A Natural and Unnatural History, visited one of Miyazaki’s research stations in 2012, writing compellingly about her experience for Outside Magazine. As Miyazaki told her, “Throughout our evolution, we’ve spent 99.9 percent of our time in natural environments. Our physiological functions are still adapted to it. During everyday life, a feeling of comfort can be achieved if our rhythms are synchronized with those of the environment.” In short, because humans evolved in nature, it’s where our bodies feel most at ease, even if our minds don’t know it.

Qing Li, an immunologist at Nippon University in Tokyo and chairman of the International Society of Forest Medicine, has also made some fascinating advances. Li’s work deals with identifying the individual natural components that make our bodies respond in such favorable ways. Li suspected that, in addition to the sight of nature, the scent of evergreens and other trees had a considerable role in the health benefits of forest bathing. He tested this by leaving subjects in hotel rooms with cypress aromatherapy, finding that their numbers of natural killer cells, which protect against infection and cancer, had similar increases with the simulated indoor “forest” and a visit to the real thing. Anyone up for a walk in the woods with some cypress aromatherapy tied around their neck? 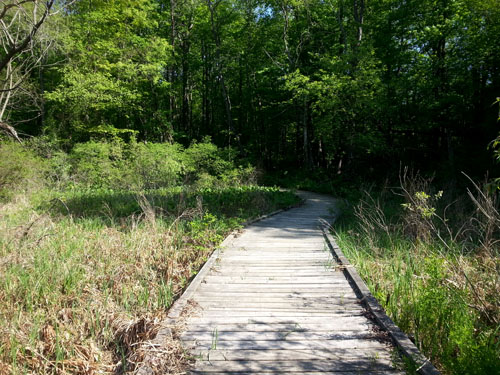 Aims of forest wellness absent, Detroit isn’t without significant arboreal attention. The Greening of Detroit has been reforesting the city for the past 25 years, planting over 81,000 trees. It sponsors plantings all over the city every few weeks, and residents can apply to plant trees in their neighborhoods with the Greening’s assistance. This helps, but it’s not meant to make a forest. Last week, Hantz farms did a massive tree planting over 20 acres on the east side, the beginnings of what will be Detroit’s first forest in a while.

Volunteers spent Saturday morning plugging 15,000 trees into pre-dug holes at a cost of about $20,000, an amount Hantz Farms expects it will take a long time, if ever, before the tree farm breaks even. The new saplings are white birch, bur and swamp white oaks, flowering dogwoods, and sugar maples. No cypress, no firs or pines, Hantz Farms? Too bad. There are plans to tap the maples for syrup when they come to a riper age. As part of their hopelessly controversial deal in purchasing the land from the city, they’re forbidden to sell anything, making the more traditional agriculture they had in mind unfeasible. Instead, the trees will beautify and be a showpiece for what is possible with a large-scale urban farm. Nice, huh? For now, there’s not a lot to look at. A video drone captured a disorienting view of the neat rows of holes in the ground.

How open to the public will the new woodlands be? Can visitors freely wander through the rows and admire the trees? Hantz Farms hopes that the soon-to-be majestic stands of white birches and flowering dogwoods will attract visitors to the neighborhood, “a place of beauty in the lower east side that people can go out of their way to see in the spring,” as president Mike Score said in a radio interview. Hopefully this will be more meaningful than just a slow drive through the streets, a parade of idling vehicles offsetting the good atmosphere generated by the trees. Hantz Farms has been glowing with praise from the immediate community, about 200 of whom were believed to have attended the tree planting. According to surveys, 94% of neighbors supported the project. That’s much better than recent outcries over the Greening of Detroit’s dendroremediation projects, where frustrated residents voiced fears of air pollution as contaminated soil was unearthed. As John Hantz told the Free Press on Saturday, “It’s really a community deal happening today,” he said. “How many more people are out walking now? This will be the first summer they can walk to church instead of drive because they feel safe.” Let’s hope this is what happens!

Paradoxically, other dreams for significant reforestation in Detroit have been regarded with little but skepticism. Encouraging the growth of a dense forest was suspected to result in more places for criminals, rapists, drug users, and other objectionable types to hang out. If open spaces deter crime, some of the homes adjacent to Hantz Farms’ woodland might be in trouble, situated immediately next to the new trees. Will the trees be equipped with security cameras? It’s a strange deal to live in a city that turns increasingly wild as the years ebb — the quiet woods a tradeoff for the peace of mind in living within easy sight of each other that urban neighbors expect. Whatever the eventual social outcome, at least, according to data from researchers like Miyazaki, Li, and others, it might do wonders for residents’ blood pressure.