This week, grab a sweater before you head out — apparently the polar vortex doesn’t yield to pedestrians, either. A piece of this arctic wind system seems to have broken off (by whatever mechanism wind “breaks” into “pieces”) and barrelled through Canada again, just like in January. While some insist this midsummer breath of fresh air is the vortex’s fault, the National Weather Service has retracted its previous observation. Meteorologists are tweeting their discord over what kind of air event this is, from polar vortex to “polar air invasion” to a mere “trough in the jet stream.” As one meteorologist said in a nicely graphic-assisted defense of the term, “Some critics are being too literal about its definition and/or burying their heads in the sand, blinding themselves from a fascinating weather reality.” Sounds a lot like the debate over climate change, actually.

The Free Press supports the National Weather Service’s new position that the chilly spell has less to do with polar air than with the usual jet stream breezes disrupted by a typoon — if not one sensational thing, then grapple for another. Mlive also denies heavy polar vortex involvement in this week’s weather, which, in a temperate summer overall, doesn’t even feel that weird, but advises to keep a lookout for waterspouts forming as the cold air glides over warm water. If you see any of these bumming around on the river with the freighters, let me know and I’ll ramble over extra-fast.

Whatever your beliefs about arctic air patterns, it’s luxurious waking up to a piece of Christmas in July. To acknowledge this meteorological gift of walking around being less sticky, I present some items from my ongoing collection of red bows found around town. Why are the bows always red? Why is the grass green, the sky blue? Science, of course. Social science.

This early holiday celebration is for longtime rambler Sara, who might love autumnal weather even more than I do and has recently been so kind as to share photos from our Hamtramck ramble in the Detroit Area Rambling Network flickr pool. Thanks!

And last but not least a boa of sorts.

And a rainless rainbow emerging from the casino. Merry Christmas! 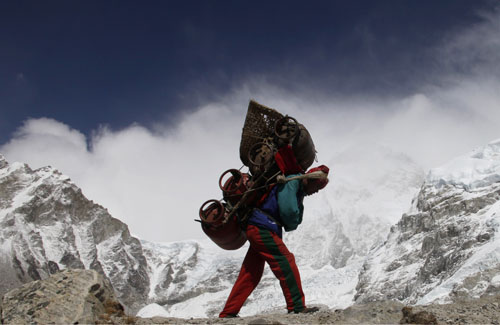