Aside from wandering around, one of my favorite things to do is pore over maps, which is why I’m so fond of the diligently-updated DETROITography blog. When I awoke Friday morning to a post relating a psychogeographic approach to the Midtown Loop by Alex Hill, I was inspired to do some more deliberate psychogeography myself and replicate Hill’s walk.

Hill’s impression of the Midtown Loop in early June was heavy on the exhaust and diesel fumes, and he concluded by suggesting that reducing car use be a priority on a route that is supposed to be one of Detroit’s walkability showpieces. For the most part the Midtown Loop resembles your average street and sidewalk pairing, except with fancy pavement designs and noticeably upgraded landscaping near the Science Center. Hypothesizing that results of my walk would differ between night and day, I decided to travel the loop twice. 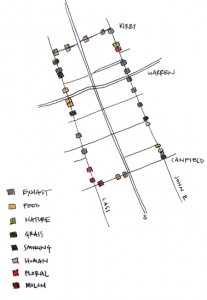 It was a more yogic walking experience than I’m used to, forced into awareness of my breath as I tried to detect some scents. On both walks I took, one on Friday around noon and another on Saturday around midnight, lovely winds rushed at me, especially on the long north-south stretches of Cass and John R. Many of these gentle gusts brought clean riverfront air, concealing native scents. 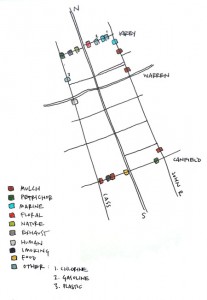 Daytime is much smellier for the Midtown Loop than night, with thirty-two scent events compared to eighteen after hours. While I wasn’t struck by its unpleasantness while walking, exhaust fumes were abundant on my daytime loop, accounting for eight scent events where traffic lined up at stoplights. The nighttime walk was dominated by five great woodsy whiffs of fresh mulch. More mysterious scents floated through the night air — chlorine, gasoline, and a funny plastic reek, none of which had an origin visually evident.

The lunchtime smells of fried food at La Palma, tempura outside of Wasabi, the meat and fried things at Warren and Cass, and a generic restaurant smell outside of the Whitney gave way in the night to a lone greasy odor at Woodward and Canfield. Predictably, the loop smelled of other pedestrians much more during the day than at night — smoking, cologne, deodorant, and laundry smells were as much a part of the experience as the landscape itself.

It was interesting how poorly scent mapped onto place, how dissociated an aroma might be from its origin. Without the usual visuals, I had no idea where I was. For all I could tell, the nasty barren lawn of the hospital complex may as well have been a forest trail, and the daylilies blooming along Canfield were invisible to the nose. One might conclude that the Midtown Loop was designed to be experienced less with the nose than the eyes.

Although it’s no joking matter, this may be the one way Detroit is safer for walking at night. The daytime air pollution from traffic that was so unappealing for Alex Hill during his walk dissipated at night. The relatively clear air after dark is a significant benefit for pedestrians uninterested in basking in noxious fumes and harmful particulates as they stroll along a greenway.

One thought on “Smells of the Midtown Loop”