Hello from Screen-Free Week! Screen-Free Week is a collective effort to “spend seven days turning OFF digital entertainment* and turning ON life! It’s a time to unplug and play, read, daydream, create, explore nature, and spend time with family and friends. *work and school assignments not included.” I’m actually writing this on my Etch-a-Sketch, so it doesn’t count. Surely no one gets hit by a car Etch-a-Sketching while walking.

The virtues of spending time without screens have made the news lately, for reasons beside the obvious or usual — obesity, heart disease, depression, other depressing conditions. Julia Filip, writing for the Atlantic, put together a tidy summary regarding the alarming worldwide increase in myopia. It’s not news, but in “Nearsightedness and the Indoor Life,” she suggests that we all get outside a bit more, reporting that between the 1970s and the turn of the century, myopia rates increased 66% among people between the ages of 12 and 54. The situation isn’t getting any less blurry. One quarter of people on the planet need glasses, a number that is forecasted to increase to a third by 2020 (futuristic as it sounds, that’s in just six years).

Much research is under way to find out why children need glasses at younger and younger ages, and what can mitigate the more serious longterm health risks that can arise from fuzzy vision. Filip talked with Dr. Maria Liu, head of the Myopia Control Clinic that opened last year at University of California, Berkeley. “The eyeballs are very adaptive while they are developing,” Liu explained. “If we impose a lot of near work on the eyes as they are developing, the eyes will interpret nearsightedness as being the normal state.” Filip writes,

Although modern lifestyle makes it harder to fight the disorder, there is something parents can do to prevent its early onset. “Increasing outdoor activities is a very strong protective factor for myopia,” Liu said. “Whether it is because hormonal levels are different outdoors, or because the light intensity is stronger, or because we do less close-up work, it has been shown consistently that outdoor activity is very protective and tends to slow the rate of progression.”

Taking breaks from myopia-inducing work every ten minutes and “looking in the distance” is also quaintly suggested. Last fall, Brian Palmer covered the subject for Slate, looking at studies comparing child development in Australia and Singapore and its impact on vision. Suspiciously, he notes that “small children look adorable in eyeglasses” — why do people like the sight of impaired kids so much? Maybe this early-onset myopia is a greater survival adaptation than we give it credit.

Palmer focuses on the outdoor aspect of the puzzle, saying that if near-work is really the culprit, it’s problematic for culture and education. Let kids be healthy and illiterate, or teach them to read and risk retinal detachment? “If the problem is just a matter of light intensity, however, you could send your child outside to read,” Palmer writes after reviewing some studies done with rhesus monkeys, who, you can bet, were not reading anything. Unable to suggest a solution, he goes on to cite statistics on childrens’ lost time outdoors.

What can we do? Lots! Screen-Free Week has a few relevant recommendations among their “essential handouts.” They look remarkably like living a normal life, but, perhaps, without stopping to text every three minutes. (Screens for communication are, however, permissible). Anybody want to go build a fort, taking care to include breaks every ten minutes to look into the distance? 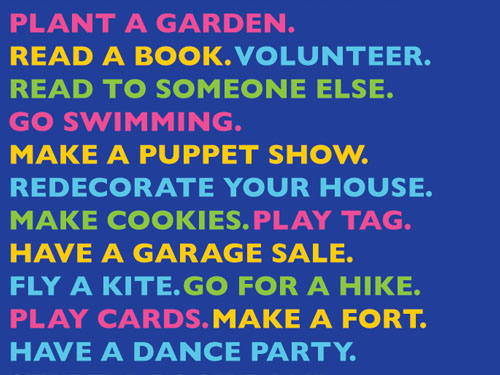