The first flower I saw this spring was probably the brightest I’ll see for a while. Leaving the 15th annual Alley Culture seed exchange, spring was on the radar, and a flourishing of pink projected up from the scrubby grass of the sidewalk margin. It was a fake flower was stuck in the ground. (Alley Culture’s always highly-anticipated spring newsletter is out, with a generous blurb about rambling to remind you of our next walk on April 6). 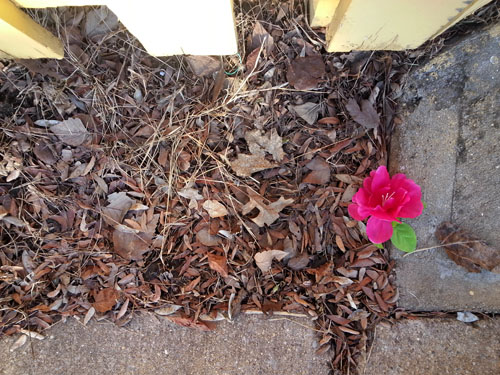 Today’s walk was 25 degrees and sunny, wind stinging cheeks and ears. Plants have been on their way up for some time now, the spiky fronds of daffodils poking out of the ground like pineapple tops, welcoming and waving, like “Aloha — warm weather.” It’s reassuring to see something green emerge from the subsiding snowbanks, unlike the dismaying quantities of dog poop mounded on grassy stretches and sidewalks alike. (Prentis and Third dog owners, for shame! Get your shit together. Literally.) It was, of course, just a matter of time before something bloomed. 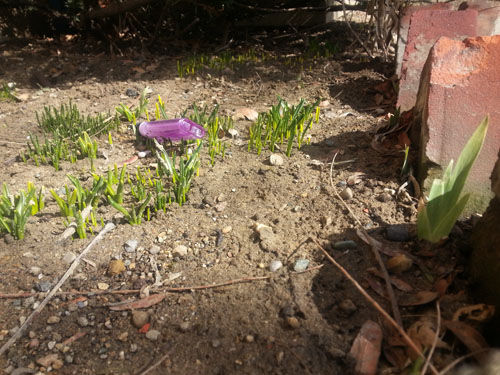 The first real flowers I’ve seen this season, a scant three days before the equinox, are Galanthus nivalis, commonly called snowdrops or snowbells and less often referred to as “February fairmaids” or “dingle-dangle.” They were coming up against the south-facing shelter of a big stone church amid some twiggy bushes that I mostly ignored and whose name I don’t yet know. 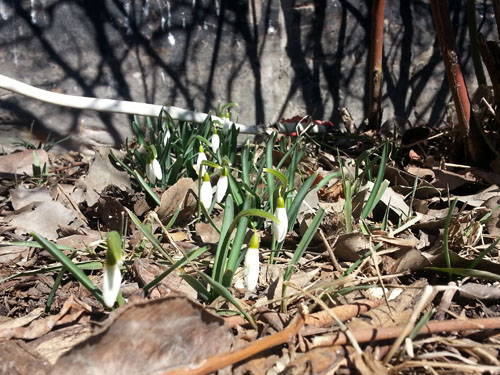 The name ‘snowdrop’ can be traced back to 1633, when the revised edition of London botanist and herbalist John Gerard’s enormous tome Herball, or Generall Historie of Plantes appeared. Although it makes enough sense visually (the tenacious plants pushing up through snow; the white flower hanging droplike from its stem), no one seems to be sure exactly where it came from. In the initial 1597 run of his book, Gerard was referring to it as the “Timely flowring Bulbus violet.” Some say the change may have been of German influence, the word Schneetropfen being a type of earring popular around that time. Whatever their name, they’re a most pleasant zeitgeber.

Incidentally — or not; it’s not as though there are plentiful floral options available this time of year — snowbells or snowdrops are practically the official flower of Dragobete, the ancient Romanian Valentine’s holiday celebrated nearly a month ago now. Tradition instructs girls and boys to pick snowdrops or other early-flowering things as a gift for the person they’re sweet on.

Despite the photographic evidence otherwise, I do actually walk places; I don’t just crawl around on the sidewalks, rummaging through bushes. On the subject of weird walks and a sudden flourishing, the West Coast’s crazy toast person, the one single-handedly responsible for the rise of the humble slice of Maillard-reactioned bread to artisanal fetish object, makes an appearance on This American Life this week. In her walks around San Francisco, she doesn’t literally crawl through any brambly bushes either, but the metaphor might not be a bad fit.

Giulietta Carrelli, zesty proprietor of The Trouble Coffee and Coconut Club, has schizoaffective disorder, which sometimes leaves her wandering the city for twelve hours at a time, hallucinating and lost, unable to recognize even herself. John Gravois, 35-year-old non-hipster and father of two, was the unlikely investigator into the origins of the toast trend. In a version gently dumbed down for radio, Gravois narrates, “She remembers this one episode, a long delusional walk though San Francisco, during which she called police to let them know a tree had fallen on top of her, which it hadn’t. And finally Guilietta found herself at China Beach, in the northwest part of town. On the sundeck was an elderly man, sitting on a towel, wearing a speedo, sunbathing on a cloudy day that suggested anything but.” Guilietta chimes in, “His socks always matched his sweater — no matter what. I was always amazed by that. But he was mostly in a Speedo, tanning.”

Gravois says, “This would be the beginning of the beginning for Giulietta and Trouble Coffee.” He describes her in her uniform of crop tops and headscarves, covered in tattoos, even her permanently-freckled cheeks, “like a biker Pippi Longstocking.” Like Pippi, you never know what you’ll find out on a walk. Flowers, a decent This American Life podcast in your headphones, Holocaust survivors relaxing in Speedos, who knows.

UPDATE 03.18.14:
What you’ll find out on a walk today is … more flowers. While these buttery yellow crocuses caught my attention, my attention caught a dog’s attention, and my camera’s attention wandered off into some other depth of field. The dog did not stop to smell the flowers, but it did smell me. 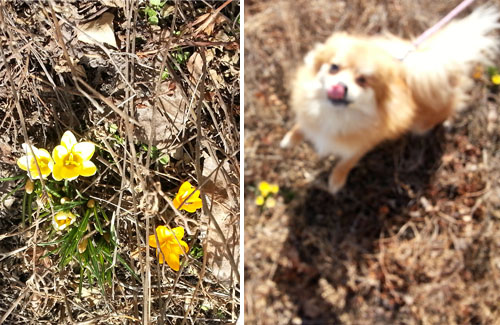