It’s hard to believe it’s the ides of January already, well past the holiday season judging by the number of evergreens thrown to the curb. 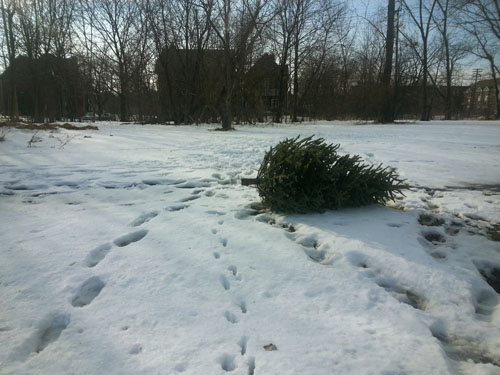 Around the holidays, still in the thick of celebrations, the radio was already abuzz with ardent talk of resolutions for the new year. Shows about lush holiday entertaining were broadcast adjacent to those on which guests were interrogated about how they might resolve to become their better selves in a few days. As usual, a notable majority talked about being healthier. Women polled about their resolutions were more concerned with losing weight, while getting fit was how men envisioned their new year goal.

Since then, the media situation has not improved. Articles with instructions on sticking to these sometimes unrealistic expectations have proliferated, along with supporting materials. New York Times writer Jane Brody calls this the “Empty Diet Claim Season,” and reports being overwhelmed by 25 pounds of new cookbooks arriving at the office. Targeted to aid weight loss and wellbeing, titles such as Cavewomen Don’t Get Fat and Weight Loss for People Who Feel Too Much offer myriad ways to accomplish these aims.

Advice that can be easily assimilated from the comfort of a favorite couch or armchair means well, but the consensus is that neither diet nor exercise alone will cut it. Walking is an easy resolution target, too often seen as a compelling way to court fitness without breaking too great a sweat. While it might help maintain some level of fitness, walking isn’t going to get you in shape on its own, at least at the poky pace most of us move.

Some people vow to walk more; others to walk faster in response to recent research analyzing data from the National Walkers’ Health Study. Using data collected from almost 39,000 walkers, albeit a disproportionately female sample, researchers divided the walkers into four categories based on their typical speed as measured by a six-minute walk test. All four categories boasted suspiciously high speeds — the fastest group walking a mile in under 13.5 minutes and the slowest dawdling at almost 17 or more minutes per mile, which is still an above-average 3.57 mph.

In the slowest group, however, many walkers needed 20 minutes to finish their mile, the number of minutes by which Google times directions, and some took as many as 24 minutes. Comparing walking data with death records more than a decade after the study took place, the researchers discovered something not wholly surprising — the walkers in the fourth group were 18% more likely to have died, especially from heart disease or dementia.

The unexpected news from the study was that the death rate was still high for the slowest walkers even when adjusted for duration of their walk. Taking a longer walk, thereby expending as much total energy as a person walking “vigorously” for a half hour daily, did nothing to help the participants’ risk of dying. The very slowest walkers were actually 44 percent more likely to have died than others in the study, despite duration of walking or other exercise.

Who can tell, though, the researchers concluded, which problem came first — a lethargic walking speed or an underlying health condition, or whether the capacity for high intensity exercise is a characteristic independent of habitual physical activity. And although results were adjusted for other risk factors such as smoking, it’s worth noting that the fastest walkers also ate a lot more fruit, a lot less meat, and imbibed a shockingly higher quantity of alcohol than the slowest walkers.

All in all, whether such a study comes off as sound science or ableist propaganda, we’re still in favor of walks, long walks, and honoring the comfortable human pace at which we evolved to move. As avid New York walker Maggie Nesciur said, “I don’t walk fast; I don’t walk slow; I walk at my own speed,” her steady voice revealing a deep sense of integrity. It would be ideal if this pace happened to be the ultra-healthy 4.45 mph of the fastest walkers in the study, but as long as you can finish crossing the street without getting hit by a surge of traffic, it’s probably fine.

If not, one of the best parts of resolutions is how easily they can be changed, unlike the habits they are often meant to modify. Since many resolution-makers are already entirely off track by now, just two weeks into the new year, it’s about time to make some new resolutions anyway.