Paul Salopek, previously mentioned in January at the beginning of his seven-year trek around the world, recently wrote an essay for the New York Times. He’s tracing humanity’s footsteps as they migrated ages ago from Africa to the southernmost tip of Chile. He’s currently crossing the Middle East, just 1,700 miles into the 21,000-mile trip, eleven months into the walk, and he’s getting a little lonely.

“Why did you leave the road?” one Saudi friend asked me, puzzled, when I improvised an obvious shortcut across a mountain range. “The highway is always straighter.”

To him, the earth’s surface beyond the pavement was simply a moving tableau — a gauzy, unreal backdrop for his high-speed travel. He was spatially crippled. The writer Rebecca Solnit nails this mind-set perfectly in her book “Wanderlust: A History of Walking”: “In a sense the car has become a prosthetic, and though prosthetics are usually for injured or missing limbs, the auto-prosthetic is for a conceptually impaired body or a body impaired by the creation of a world that is no longer human in scale.”

I just call it Car Brain.

What his term lacks in subtlety, it makes up in truth. Navigating through territories overrun with this mentality, Salopek is made to feel like an outsider, caught up in a strange fringe activity. In 700 miles, he says, only one person was curious enough to be inconvenienced by walking along for a few paces. Reassuring others (and perhaps himself) that what he is doing is not extreme, he notes, “Sitting down is what’s radical.” The people he meets ask if he is sick or crazy. He continues, with his little crew — at this point in the trek, he’s travelling with camel herders, a guide, and a translator. 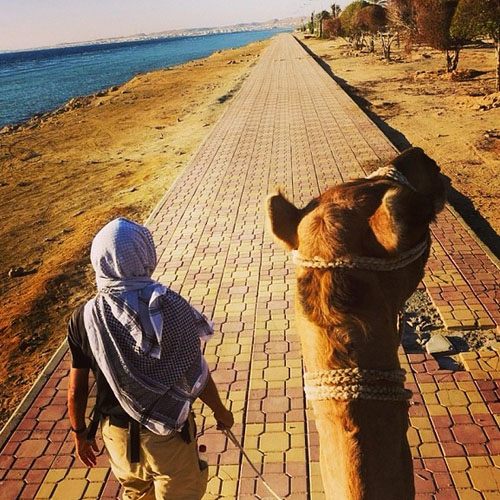 His invisibility to the Car Brain and the culture that promotes it is something very familiar to us, to pedestrians everywhere, as we take our chances on the streets. “Sometimes, out walking, I feel like a ghost,” he writes. Perhaps ironically, this seems to be exactly on point with his original aims in the project — to recreate the pathways wandered by ancient humans in their dispersion across the globe. By walking their walk, he’s become one of them, has merged with another society at odds with his own. It’s challenging to be part of two worlds when the overlap is sloppy. Here, the National Highway Traffic Safety Administration announces cheerfully that at some point “everyone is a pedestrian,” but it’s a truth easily forgotten in the ruts of the Car Brain. 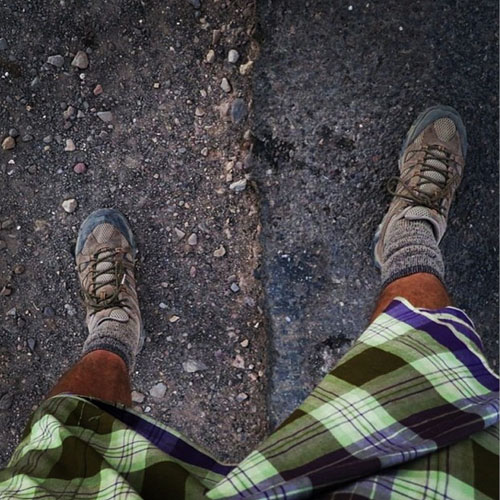 Salopek will be featured in National Geographic magazine’s December issue, commemorating his first year on the road. He’s at about 8% of his goal, a humble portion of the total mileage, despite days clocking as many as twenty-five miles on poor rations. One wonders whether the trip will stretch longer than he expects, considering that no small number of those miles slipped past in a few days as he took a camel boat across the Red Sea before arriving in the Middle East. In a blog post for National Geographic, he writes,

Walking is like language. It is like most ideology, theology, and cosmology: a locally conceived idea. Countless inflections, dialects, and variations of walking will appear and disappear along my route. How many such taxonomies must I navigate across the world? And will my own walk survive?

His piece in the New York Times is brief but beautiful, as Salopek puts forth one word after another attempting to account for the wonders he sees. Referring to the three-mile-per-hour speed at which the human body evolved to travel, he says, “There is something mesmerizing about this pace that I still can’t adequately describe.” Fortunately, he keeps at it. He has a book about the adventure due out in 2016, so despite never being far from civilization and its roads and airports, quitting is unlikely. And, as he writes, fatigued from another day’s sun, sand, and wind, he’s happy — the kind of happiness that rarely rides in the passenger seat.

Keep track of what Salopek is doing through the Out of Eden website, National Geographic’s page, updated weekly with fascinating cultural observations, and the walk’s Instagram, populated with photos depicting the “slow pleasures” the Car Brain misses.