The intersection of walking and art is never far away. Few can get there faster than Steve Panton, artist, engineer, and proprietor of the gallery 2739 Edwin in Hamtramck. Panton has been exploring the city on impressive, intimidatingly long walks for years, accumulating insight on his surroundings, at one point cataloging 120 former bank buildings. His excellent essay on walking appeared in Model D. In testament to his enthusiasm for the subject, he curated a show of eight local artists’ work in Walking Distance (pdf) in 2009. 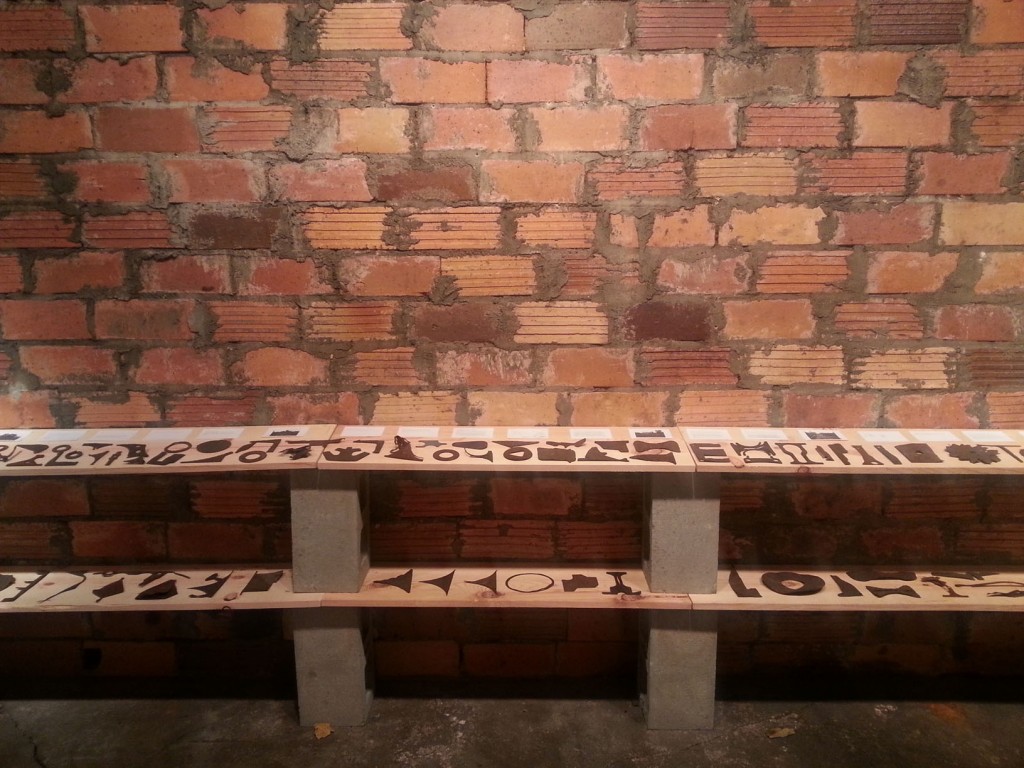 Panton’s most recent exhibition is part of the show working title, on view at Alley Culture in Woodbridge Farm from November 1-23. This Sunday evening Alley Culture will host a special presentation of Panton providing background for his piece, historian Martin Hershock discussing the transformation of landscape and culture during the expansion of the railroads, and a screening of the film “Who is Bozo Texino?”

The piece, titled A railroad is like a lie, consists of steel forms carefully selected on railroad track walks and notecards typewritten with a historic timeline, photos, maps, figures, and quotes, giving context to the rusty artifacts. The fragments are arranged with the smallest at the beginning of the timeline to the left, and the larger ones occupying a second tier below. The arrangement unintentionally lends the pieces a kind of momentum, not unlike a train picking up speed. 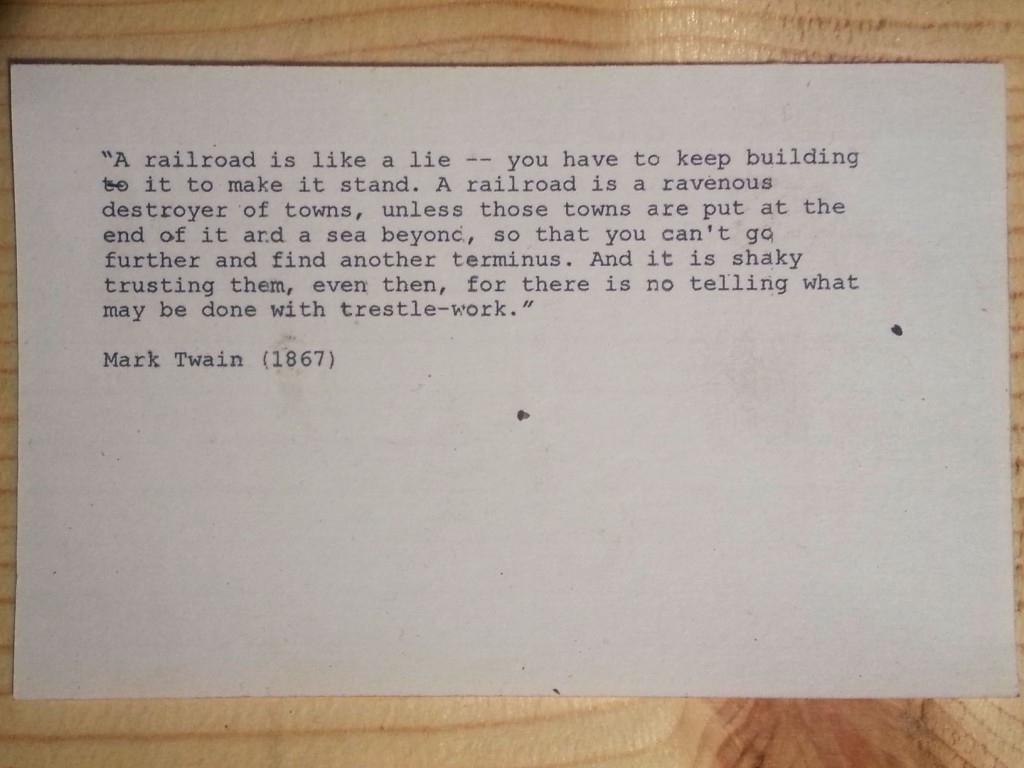 Panton has been collecting the shards for several years, taking just one during each walk he makes along the tracks between Joseph Campau and the area between Third and Rosa Parks, depending on his destination. Because his rules advise against putting a piece back if a more appealing one appears, some walks yield none. He doesn’t keep track of the chronology of his selections; there are too many, the ones on view at Alley Culture only a part of the whole collection. 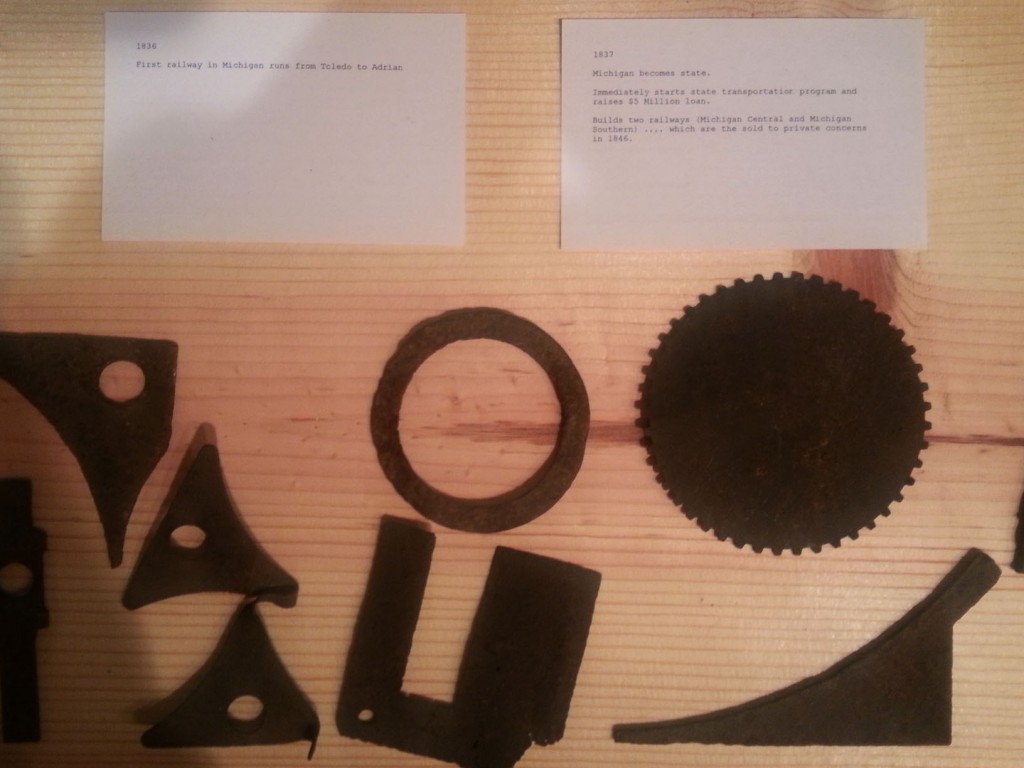 During a recent Saturday afternoon’s open hours, Panton himself was sitting the gallery, outfitted in cycling apparel. He bikes a lot in the summer, he says, but can’t wait for winter walks, his favorite season on foot. An open book was lying facedown on a stool next to the woodstove. Panton was chatting with a friend, explaining the end of common-ground cattle grazing on the farms that the train tracks cut through. He picked up notecards as reference, pinpointing locations on several small maps. 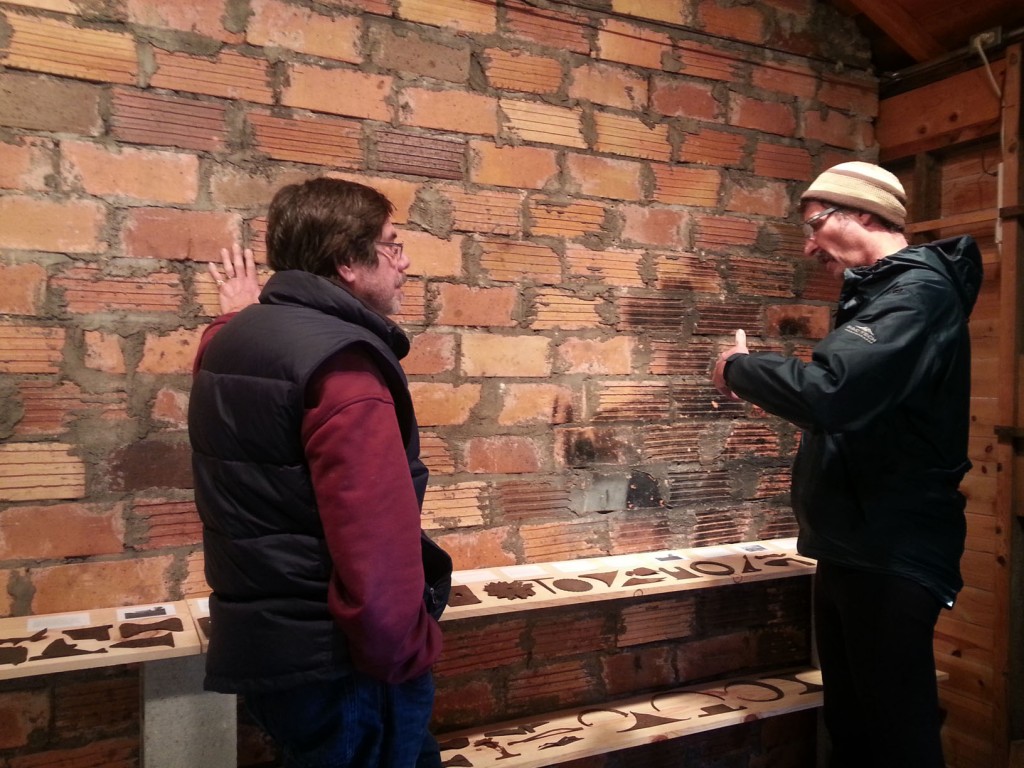 The deceptively simple metal pieces seemed to attract tactile investigation. A visitor touched a particularly wild form of metal spiraling on itself, one of the few that extended beyond the second dimension. He interjected, “Did you see any cattle skulls lying around?” Panton, smiling, said, “No, not between here and Hamtramck.”

When asked about the research phase of his work, Panton laughed, recounting how it had all been carried out in a three-week period prior to the opening of the show. The walks came first; all else followed. While his command of history and willingness to engage in any aspect of the topic were admirable, what’s striking is how much of the actual human experience vanishes into academic context, the way photographs displace memories and become what’s “real.” Perhaps this is Panton leaving the introspective quiet of his walks in the personal realm, or mirroring the way that locomotive machines overtook the land.

Does knowledge of the historical context of his walks cause him to perceive them with greater awareness? “I definitely do see it differently, now. It’s less of a convenient and fun way to get from one point to another but a part of history,” he said. “You can see how Detroit grew up around the railroads, how Hamtramck especially exists because of the railroads.”

Don’t miss the rest of the story during “A night out on the rails” this Sunday, November 17 from 7-8:30 at Alley Culture Detroit. Alley Culture is located in the red building off of the alley between Trumbull and Lincoln, just south of Willis.