As summer bleeds into fall, the note of death is already in the air among the fading leaves and crisp breezes. 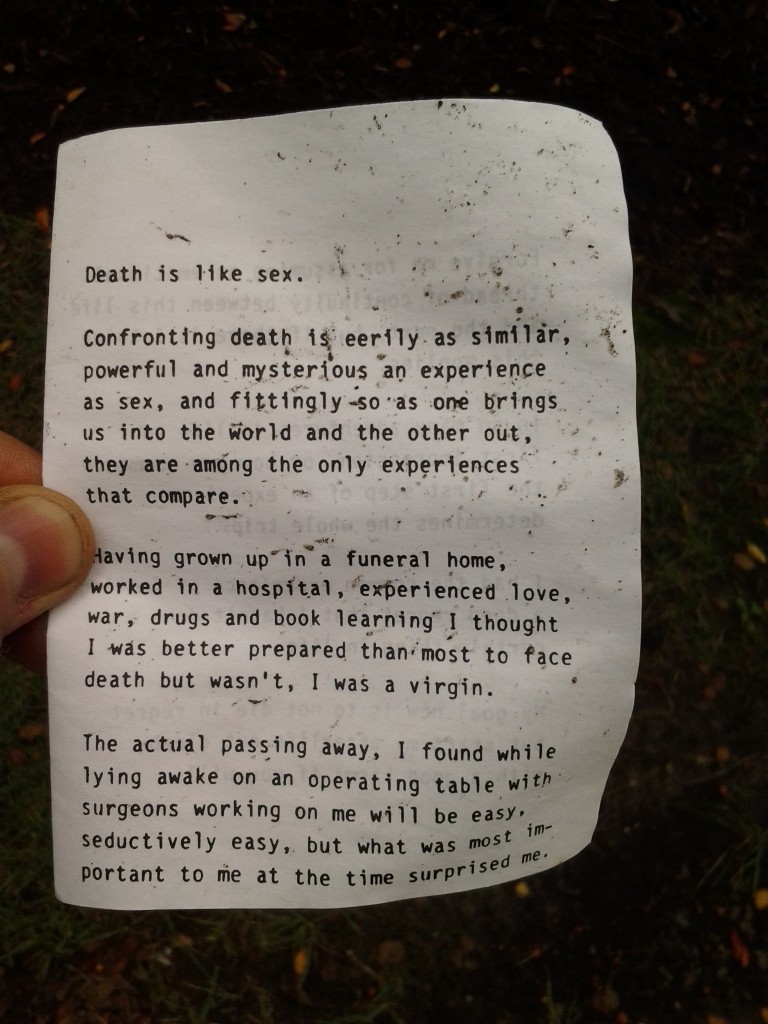 It is and it isn’t. The 100-Mile Conversation is a project organized by two artists, Nathan Burr and Louis Buckley, to use the landscape as a tool to shift perspectives on the difficulties of discussing death with openness and honesty (and, we hope, humor). “Understanding the true definition of landscape to be an inner emotional state that we project onto our surroundings,” said Nathan Burr, the walk was intended to overcome cultural and conceptual obstaces as well as the usual hills, roots, and rocks. The walk took place over several days, beginning in Winchester, moving along the South Downs Way National Trail, and ending in Beachy Head, a notorious and perhaps ironically-named hotspot for suicide jumps, where chalky cliffs project over the sea. 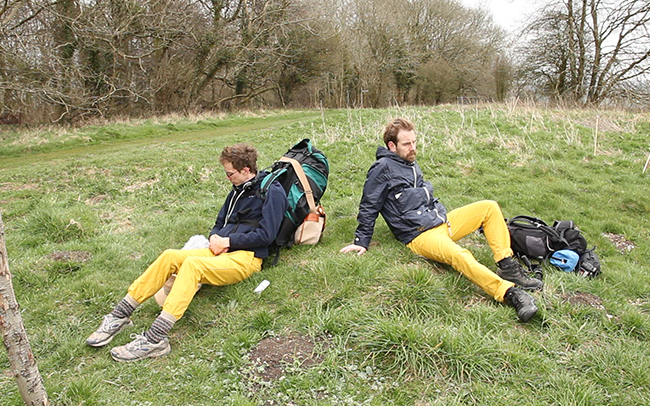 Death-talk enthusiast Clare Davies joined them for half of the walk. Other than walking and talking about death with anyone who had the temerity to come along, they occupied themselves camping, making little videos, and looking at lichen, which certainly seem less mortal than soft humanity. Their guests included Virginia Woolf’s biographer, psychologists, archeologists, musicans, a paranormal investigator, and of course more artists. Coming up on the end of it, Davies saw a table, and “as I got closer, blue and yellow balloons tied by strings to its legs, dancing, hysterical, in the wind.” As a Death Cafe host, she said,

“The purpose? To discuss suicide. Bringing the cake had been my idea. How apt, I’d thought, how crazy even, to celebrate the project’s end by drinking tea on a cliff edge; how right, somehow, to celebrate life with an abundance of cake at a beauty spot marred by the sadness of suicide jumpers.” 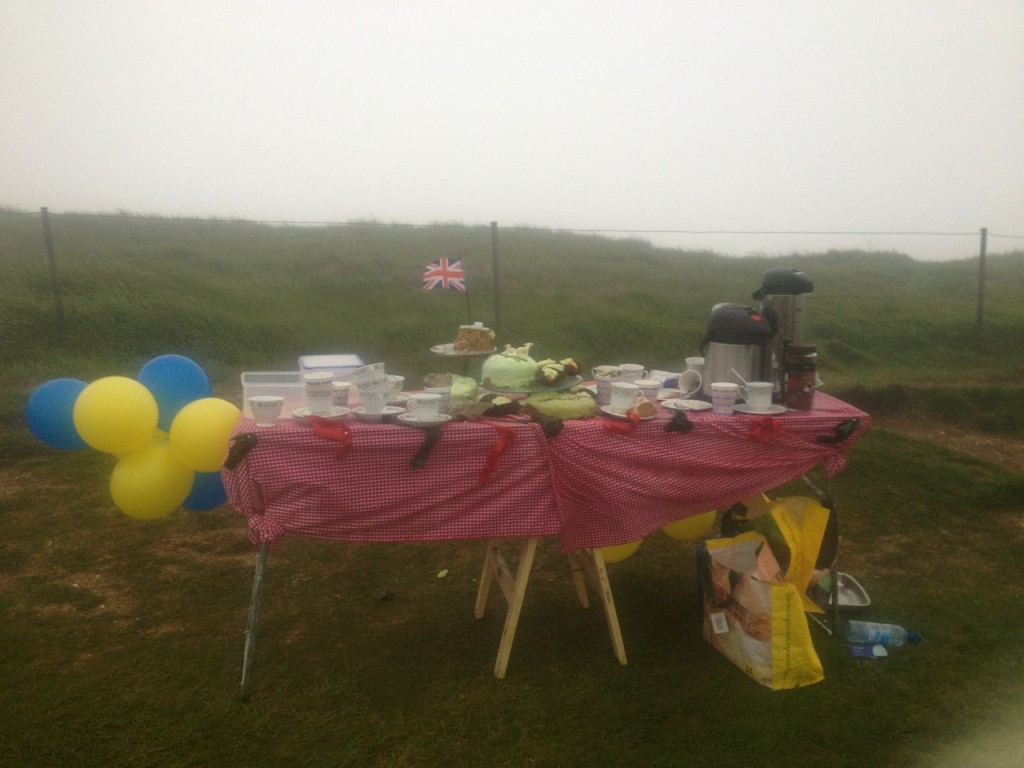 Itineraries and transcriptions from conversations can be found on the project blog, along with other depressing but potentially enlightening words.

In Detroit, what would a 100-mile walk around issues of mortality look like? Quite different from the kinds of death that live in the lonely hills of England, or the infamous bridges of San Francisco. In a city, death is all over the streets, in the houses and apartments, piling up in hospitals and cemeteries. If we walked a mile for each homicide this year, where would we be? A 100-mile conversation starts to seem as short as life itself. 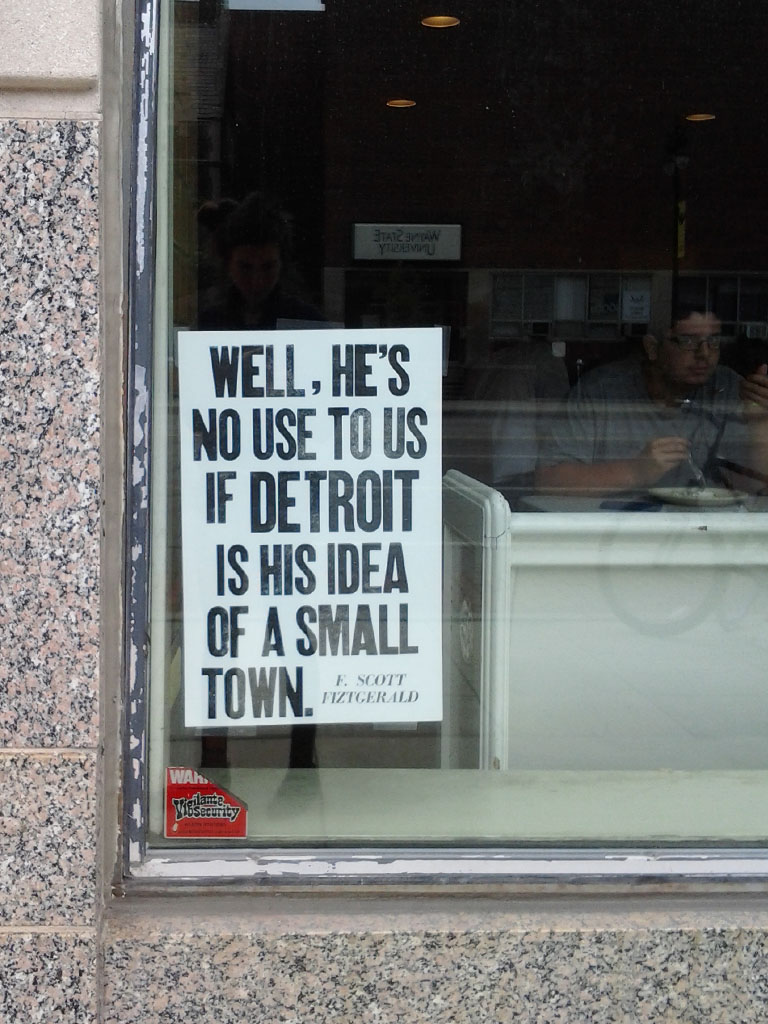 They stood side by side examining it. I was going to ask to see the rubies when the phone rang, and Gatsby took up the receiver.

Walking past the window of the creperie, this sign feels like a reminder that, however citified or gentrified, Detroit is still a wild west of sorts, a frontier. A city populated by outlaws, cowboys, and pioneers with rough hands tending chickens in backyards. If this is anyone’s idea of some dinky podunk outpost, we don’t need them here, their disrespect, their stagnant, unconstructive attitude.

In the context of Detroit’s rebound (bankruptcy filings aside; there wasn’t a crepe shop here five years ago), is there any irony in placing this sign in the window? The Great Gatsby, the glamorous and tragic story of the darker reaches of American dream in the prosperous 1920s, incidentally a period of great growth in Detroit, is often interpreted as a warning against decadence in a burgeoning economy. Perhaps this looks too far forward — in the meantime, the more congenial message promoting solidarity and change is welcome.

Print by Ben Friedman available on Etsy from Signal Return Press in Eastern Market. First time I’ve seen one of these hanging up around town.